As the domestic housing market continues to be heated and household debt soars, the government has unveiled a plan to target these issues by regulating some of the housing transactions and apartment bidding qualification rules.

The government said it will now designate 37 key areas in heated real estate markets such as southern Seoul that need regulations. It will prohibit investors in such regions from selling pre-construction apartments before they actually take ownership of the unit.

Furthermore, the government will limit how often homebuyers in such regions can participate in the apartment bidding process to reduce speculation that is often blamed for raising housing costs.

Real estate market insiders have mixed views about the government’s decision to prohibit the transfer of purchasing rights of housing units in regions that are experiencing a pre-construction sales boom.

Some experts say the new rule will be able to reduce speculation and allow more average households a chance to move into new or reconstructed apartment units in hot regions.

“We see the new regulations will have a positive impact in the real estate market since it will be able to transform the market into where there are a more number of people who actually want to live in the places they are purchasing [instead of those who just buy units to sell at higher prices],” said Kim Se-ryun, an analyst at KB Investment & Securities. “Housing prices have continued to rise without slowing for once since January 2014, but it has started to slow down recently. We think the new regulations will pull down high housing prices in the southern Seoul region and will stabilize the overall housing industry as well.”

Real Cast, a real estate information portal in Korea, said the new regulation would lower the demand in regions that will be affected by the new rule but that some other regions might benefit from the rules as well.

“This is a very strong rule and it will drag down the number of housing transactions and those that participate in the apartment bidding process eventually,” Real Cast said in a report Thursday. “However some of the regions in Gyeonggi that are nearby Seoul might be able to see their infrastructure system improve as well as the education system as there will be more people that will have interest in such regions from now on.”

However, some also expressed concern that the government’s action might drag down the real estate market in general as housing transactions and the construction sector will likely decline.

“The government has already implemented new regulations to tighten requirements for group loans for property redevelopments and introduced another new plan on Thursday,” said Chae Sang-wook, an analyst at Hana Financial Group. “The new plan, along with the one regulating group loans, will have a positive impact on solving household debt problems but the construction sector will have a tougher time as the supply would eventually fall as demand drops.”

Under the new law, potential buyers of newly built apartments or housing that is being redeveloped must submit income data to a financial institution when applying for group loans, a new requirement. The government’s plan is to strengthen qualifications for loans to reduce household debt, particularly as interest rates are low. 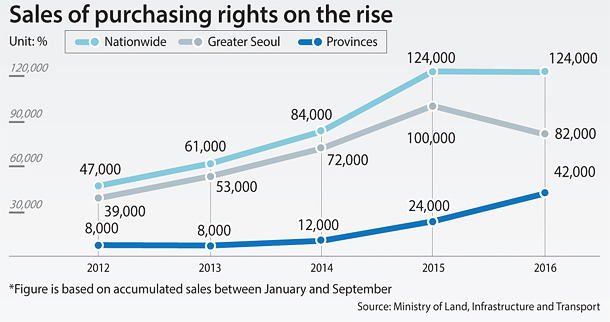 According to Chae, the local construction sector has managed to survive largely thanks to the heated housing market in Korea even though it’s performing poorly overseas. As of October, orders received by local construction firms from overseas fell 43.6 percent year on year to $21.4 billion. “The government’s plan will help improving financial stability in the nation but the construction firms would have to take the burdens from now on.”

An official from the Korea Housing Association also worried that the government’s move will drag down demand, not only in the 37 designated regions, but in the housing industry nationwide.

“Housing prices will eventually go down but there will be more empty residences that are not sold as demands will go down,” said the official. “The real estate market has helped the domestic economy recently but the newly introduced tough regulations will have a negative impact on the housing and construction sector later.”