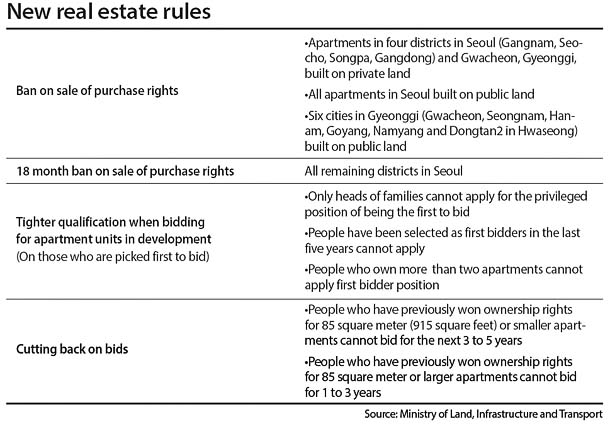 To cool the property market, the government will prohibit people from selling their purchasing rights to apartments being built or redeveloped in four districts in Seoul - Gangnam, Songpa, Seocho and Gangdong - and the city of Gwacheon in Gyeonggi.

Similar measures will be applied to public and private housing developments in most of the Seoul metropolitan area and Korea’s mini-administrative capital of Sejong starting from Thursday.

The government announced a set of measures Thursday to stabilize an overheated real estate market in certain parts of Korea. It is also worried about the soaring level of household debt, which has been fueled by low interest rates on mortgages.

“The real estate market has stabilized across the nation recently, but the market is getting heated in regions like southern Seoul, where reconstruction projects are getting done one after another,” said Yoo Il-ho, Deputy Prime Minister and Minister of Strategy and Finance. “Speculation in the real estate market is raising concerns in the local economy by creating a housing bubble in residential markets. The government will implement various regulations, such as prohibiting the transfer of purchasing rights on new developments and redevelopments and strengthening the apartment bidding process to reduce speculation as much as we can.”

Housing prices nationwide in the first ten months of this year rose 0.49 percent year on year, while the figure for Gangnam District jumped 4.31 percent during the same period.

As in many Asian countries, Koreans often buy purchasing rights for units in apartment buildings being developed or redeveloped by paying a down-payment. When construction is finished, they pay the balance of the purchase price.

But some people sell those purchasing rights before construction is finished, especially if real estate prices have risen and a profit is possible. That kind of sale will be restricted.

According to the government, a total of 37 regions in Korea will face some kind of new regulations.

Formerly, homebuyers in Gangnam, Seocho, Gangdong and Songpa districts in Seoul and the city of Gwacheon in Gyeonggi could sell their purchasing rights after six months of obtaining the rights. Now they will be prohibited from doing so until they actually move into the units.

Homebuyers in the remaining 21 districts in Seoul and 5 cities and regions in Gyeonggi, including Seongnam and Hanam, will not be able to sell their ownership rights within one year of acquiring them.

Homebuyers who won bids on pre-construction sales of apartment units that are 85 square meters (915 square feet) or smaller will not be able to bid for any future units for five years in five places, including Seoul, Gwacheon and Seongnam, and for three years in other regions the government has recently designated as overheated real estate regions.