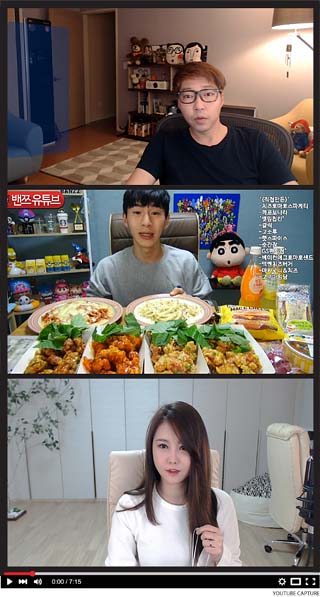 Popular live-streamer Kim Eve sat in front of her camera and laughed in surprise from the overwhelming response on her first day of broadcasting live on YouTube.

“Slow down, everyone!” she told her viewers. “I didn’t know so many people were interested in my broadcast. Where were you guys all along?”

Amid the current maelstrom in Korean politics, the online streaming community has been caught up in its own controversies. A shift is happening in the world of Korean streaming and the popular AfreecaTV live broadcasting platform has seen an exodus of some of its most popular professional live-streamers (referred to as broadcast jockeys, or BJs) who have left the service in favor of others, such as YouTube or Twitch. By the time the streaming service offered a change in policy to better cater to their existing users, many had said that the damage had already been done.

Online streaming has been a major part of popular Korean culture ever since the introduction of AfreecaTV in 2008. Korean netizens were noticeably progressive for their time, as they embraced this new genre of user-generated content rather quickly, giving rise to popular subcultures such as meokbang, or eating broadcasts, leading to the birth of internet celebrities who lead the charge of this phenomenon. The popular MBC variety program “My Little Television” was even entirely based around the platform that Afreeca popularized.

Little did they expect that their most influential live-streamers would leave their service in the midst of a controversy.

Most notable among the migrators was Na Dong-hyun, known online as Great Library, who many claim was one of the live-streamers responsible for the rise of the streaming service’s popularity. Na is popular for his live-streams of video games and commentary, becoming one of the highest paid live-streamers in the country. However, Na announced his decision to leave the service after receiving a one-week ban, which he called “unfair.”

He brought to light many of Afreeca’s policies, which users have described as an unnecessary showing of power on Afreeca’s part as the service became more successful.

Some of the problems that Na had with the streaming service included selective censorship and high commissions, claiming to have been charged between 8 million won ($7,000) and 10 million won in hosting fees.

On Oct. 26, the streaming platform provided a change in their service philosophy to address this “controversy” by reversing many of their policies that may be described as a show of power. They promised to allow regular streamers to stream in HD without limits and exercise greater leniency regarding commissions and censorship.

Regardless of this change, the landscape of the streaming service does not resemble its glory days. In the midst of this policy change, many of the service’s most popular streamers including Yum Cast, YD Gaming Channel, and Banzz had already left, taking with them many of Afreeca’s regular users.

Banzz, who many recognize as one of the most popular streamers for meokbang brought up an interesting case of shifting trends when he announced his decision to leave the streaming service in favor of YouTube on Oct. 20.

“I didn’t choose to leave in the wake of Great Library’s controversy,” the streamer explained in a video posted on YouTube. “The reason I left was because Afreeca is limited to Korea while YouTube is a platform which is open to overseas as well, allowing me to gain greater exposure and viewership.”

The majority of professional live-streamers initially remained skeptical about leaving Afreeca. There was no concrete data that YouTube provided about ad revenue, and users wondered how it would be better than Afreeca’s system of direct donation in the form of the site’s currency called star balloons. Na, however, was already reaping the rewards for switching services, reportedly earning three times as much in daily profit. The same was true for Yum Cast, who reported similar results.

The advantages that YouTube offered attracted many live-streamers, as a majority of big name broadcasters opted to operate channels on each service, streaming on Afreeca and uploading recorded footage to YouTube.

In terms of quality of content, an old complaint by users were that live-streamers were more focused on satisfying big spenders to receive a higher number of star balloons, enough to make the quality of the streams suffer as a result. This was an issue that created its own problems, such as live-streamers being encouraged by huge donations to broadcast suggestive content on-air.

While this form of outright exploitation is less rampant due to the implementation of monitoring, the star balloons system on Afreeca means that donors will always be prioritized over others, lending to the deterioration of content. It is extremely common to see streamers frequently interrupting their broadcasts to thank donors.

Afreeca has pledged to invest 500 million won into helping existing live-streamers with content creation as part of their recent policy changes, and while a step in the right direction, Na argued in an interview with Seoul Shinmun that the YouTube system of being solely based on ad-based revenue means that every content creator will be more focused on quality.

There are, however, many who chose to remain faithful to Afreeca.

“I can’t leave since there are too many fans on mine on Afreeca,” said the popular live-streamer Mr. Jaw in a video posted on Oct. 29 to YouTube addressing his stance on the controversy. He represents a group of less-popular live-streamers who feel that they will be better off remaining on Afreeca.