The cuisines of Southeast Asia take center stage: Cross-cultural influences found in the dishes of Asean nations lead to an open-minded approach to cooking

The cuisines of Southeast Asia take center stage: Cross-cultural influences found in the dishes of Asean nations lead to an open-minded approach to cooking

For over a decade, some of Korea’s most buzzed about restaurants have served food widely enjoyed in countries in Southeast Asia, even with ongoing debates over whether or not the dishes are authentic or not.

Whether a modified or traditional version is available, many locals have grown accustomed to some of the exotic spices widely used in cooking originating from countries like Thailand, Vietnam, Indonesia and Malaysia, and some have even started packing their bags and booking flights to Southeast Asia just to taste their favorite foods.

To better understand the development of the food scene in those countries and how they diversify the restaurant scene in Korea, the Asean-Korea Centre hosted a talk with chefs from some of its 10 member countries with the Association of Southeast Asian Nations (Asean) Wednesday, as part of its ongoing ASEAN Culinary Festival at COEX in southern Seoul that ends Saturday. Chefs from all 10 member countries, except Cambodia, Vietnam and Laos, joined the discussion.

“Similar to the debates we have on how authentic modern Korean cuisine is, the same goes with Asean cuisine,” said Secretary General Kim Young-sun of the Asean-Korea Centre.

“Chefs continuously seek to make their food better accepted at home as well as overseas, and the modification and development of what’s local can vary from one chef to another. But either case can be considered a successful case of making the food widely known and here we are trying to present the current status of what’s popular in Asean countries.”

At the festival, each country’s chef had prepared three dishes to present. Many widely-known dishes like Pad Thai of Thailand, Cha Gio (deep-fried spring rolls) of Vietnam and Chicken Rice of Singapore are prepared to attract those who want to try food from Asean countries for the first time, alongside lesser known dishes like Champorado (Cacao Pudding with Rice) from the Philippines or Tam Mak Taeng (Spicy Cucumber Salad) from Laos for those who want to bring their experience with Asean food to another level.

But even to many who have a good amount of knowledge when it comes to food found in Asean countries, it is hard to tell how fried rice from Indonesia or Malaysia is different from those widely consumed in Singapore, for instance. The experts who gathered for the talk say the ingredients used to cook dishes are mostly similar, but variations have been made due to historical and cultural backgrounds. In short, the use of noodles, rice, and many spices may be the common ground, but use of extra cream, cacao, or chilies can make little differences. 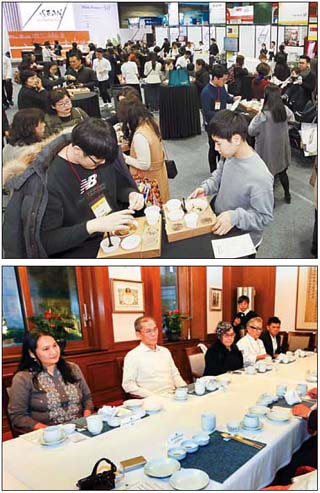 Top: Visitors to the ASEAN Culinary Festival at COEX, southern Seoul, are trying out different dishes served from each of the 10 Asean countries’ booth. Bottom: Chefs from Asean countries held a Dinner Talk on Wednesday to talk about how to better promote Asean food in Korea and how they can use more Korean ingredients in their local dishes. [ASEAN-KOREA CENTRE]

The food enjoyed in the Philippines, which was originally influenced by the Malay culture, has taken on touches of Europe as Europeans in the early 1500s used the country as a gateway for trade between Asia and Europe. It started to adopt the use of chocolate and developed a preference of butter and rich cream, said Joyce Clarissa L. Sandoval, chef and culinary director of the Mama Sita Foundation, during the talk with Asean chefs.

Regardless of the subtle differences found in the dishes, the chefs all agree that the willingness to enjoy food and different versions of dishes is important.

“The way to enjoy [new] food is a matter [of one’s willingness] of acceptance,” said Wee Liang Lian, of Wee Nam Kee. “Although the first time eating something new doesn’t [guarantee that] you will like the food, after you make a habit of trying you can acquire the taste and start to tell what you like and what you don’t like [when you are served with different versions of the same dish.]”

For that reason he said it is hard to tell which restaurant serves the best or authentic local dish, as it is up to each individual to try out many different styles and find what suits them the best out of all the restaurants, instead of just trying one and deciding that a certain dish is not up to their tastes. “It is up to chefs to prepare from their hearts and be passionate for what they do.”

More experts argue that it is up to both chefs and diners to improve the Asean culinary scene outside of Southeast Asia so that eventually there can be bridges to open up more trade for ingredients that are not currently available outside of the home turf.

“Food can travel and food cannot travel [at the same time,]” said William Wongso, the culinary expert and food consultant from Indonesia who acted as a moderator in the talk with chefs. “Some food that can be adapted and even cooked outside of the home country can work to represent the overall dishes, whether they are very authentic or not, and if such dishes interest one enough, then those come to the country where the dish is from and get to enjoy more food that are made with ingredients that cannot be found widely outside of that particular country.”

To make their dishes more exotic to their main target diners at home and bring in more international diners’ attention, these chefs have also been considering how to incorporate Korean-style cuisine into their cooking. Since a lot of Korean content like movies, TV dramas and music are widely enjoyed in Asean countries, they also see an opportunity to put Korean touches into their food as well.

Nooror Somany Steppe, a founding partner and director for Thai restaurant chain Blue Elephant International said she uses ginseng when making one of Thailand’s major soup dishes, Tom Yum. The flavor of ginseng goes well with one of Thailand’s most beloved comfort foods, she explained. She said she has been working to include more of a Korean touch to her cooking as many of the non-Thai customers who come to eat lunch at her restaurants in Thailand are Korean. The chef representing the Philippines has tried out using stickier Korean rice instead of lighter Filipino rice and found that the sauces she makes to serve pork with rice gets smeared in better with Korean rice.

“You don’t know how things will turn out until you actually try it out,” said Joyce Clarissa L. Sandoval of the Philippines. “The Korean rice has worked… and another thing I want to try is using sesame oil, maybe when I steam fish or make noodle dishes as there’s no such thing as sesame oil in the Philippines.”

While some of the chefs take a more direct approach and use ingredients that are often used in Korean cooking, some have contemplated making something new with a Korean essence but different in form. What attracts many is kimchi for its refreshing taste and spiciness. Wee Liang Lian, of Wee Nam Kee says he wants to get the flavor profile of kimchi and develop a new version that can accompany many well-known Singaporean dishes like Chicken Rice.

“Each Asean country has its own kimchi-like side dishes to refresh people’s palate from eating something greasy or heavy so putting the original kimchi right next to what we eat everyday wouldn’t work so well,” said Ismail Ahmad. “Instead, we want to create something new from kimchi to [enhance] the flavors of [what we eat locally at home.]

Budi Kurniawan, chef and restaurant consultant from Indonesia said a variation of kimchi can “add new layers of flavors” if it is cooked, for example, in tamarind soup called Sayur Asem. Mohammad Amirulrafie bin Sahminan of Brunei said that he would like to use Korean instant noodles more frequently in his cooking because instant noodles from Korea are “trending” in his country right now.

The mediator William Wongso added that attempts to include Korean flavors can help diversity local dishes at Asean countries, just like Korea’s jjajangmyeon, black sauce noodles, has evolved to be considered a Korean dish rather than a Chinese one, although it is originally inspired by Chinese noodle dish called Zhajiangmian.

“Jjajangmyeon has developed to use thicker sauce, different from the Chinese version that [I think] used more meat, and it became more like a Korean dish,” he said.