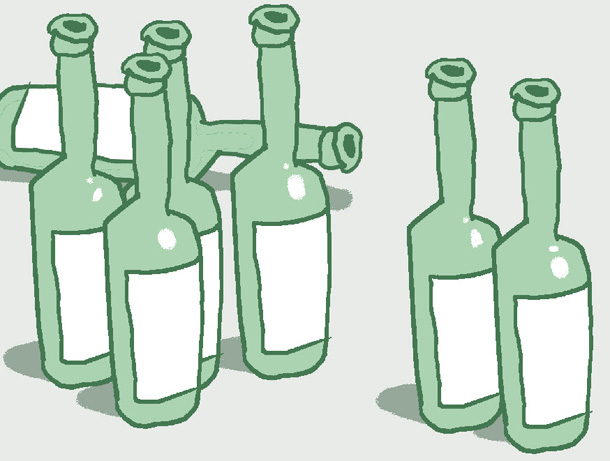 Sogang University’s life science Professor Shin Hyung-doo has realized how harmful alcohol and tobacco can be. The organization that he founded, SNP Genetics, is offering free genetic analysis on 500 people until Nov. 7. Based on the evidence that he has accumulated so far, the results for the men and women in their 40s and 50s vary considerably. For women who don’t smoke or drink, the results from the genetic analysis and general physical exam were similar. But many men had to watch their blood pressure. Even those who don’t have a genetic tendency towards high blood pressure are at risk if they drink.

Lately, personal genetic testing is gaining popularity. Since the end of June, consumers can find out their genetic traits without going through a doctor. It is quite simple. You can swipe cells from inside the mouth and send it to the agency. For about 150,000 won ($132), you get a report of risks on 12 categories, blood sugar, aging of skin, hair loss and obesity. Due to the concerns for errors in analysis, it is prohibited by law to analyze genetic traits for severe illnesses such as cancer.

It is certainly useful to learn about your genetic information. But some scientists are wary of genetic effects because of environmental variables. For example, a pair of identical twins may have a different physique depending on how they are brought up. Obesity is also closely related to socioeconomic factors. We are familiar with studies that people with lower education and income are more prone to obesity. There are theories that environmental factors are also carried down to the next generation.

Koreans’ alcohol and tobacco consumption is rapidly rising. According to the National Statistical Office’s study on household spending in the first half of the year, the average consumption of alcoholic beverages and tobacco products increased by 7.1 percent compared to the same period last year, while spending on all other categories decreased.

Global market research firm Euromonitor International’s survey also shows similar results. Among 24 countries surveyed, Koreans drink the most alcohol, with an intake of 168 kcal from alcoholic drinks per day on average. This is disgraceful. We are worried that alcohol and tobacco consumption may be socially inherited to the next generation.

In this gloomy season, Koreans are shocked by President Park Geun-hye’s scandal. We are shocked and disappointed at the endless allegations and corruption. It’s been over ten days since the Choi Soon-sil scandal was exposed. We are so helpless, and only alcohol and cigarettes could provide comfort. We have already been traumatized by the Sewol ferry tragedy and Koreans are groggy. We are suffering from anger and frustration. I am afraid that the Korean people’s genes may become mutated. With the money that Choi and the gang pocketed, the entire nation needs psychological therapy.