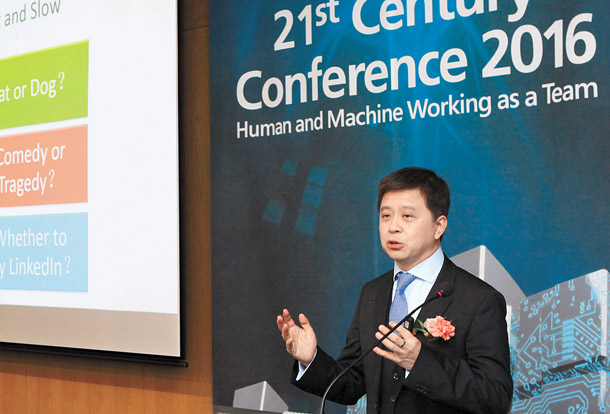 Microsoft is jumping into the local competition against voice-activated assistant services like Apple’s Siri and IBM’s Watson as it prepares to launch its Cortana intelligent personal assistant service in Korea.

“I’m not at liberty to give exact date, but it is imminent,” Peter Lee, corporate vice president at Microsoft Research, said during the company’s Computing in the 21st Century Conference held Thursday at Yonsei University in western Seoul. “Generally, we view Korea, Japan and China as a very important market [in Asia.]”

Cortana is Microsoft’s intelligent personal assistant that can respond to a user’s voice to send emails, activate applications and perform other functions on a device. According to company data, it is currently used by 113 million people and has answered over 12 billion questions.

The service is currently available in eight languages including English, French, Spanish, Chinese and Japanese, but a Korean version has yet to be developed. If launched, it would be competing against IBM’s Watson, an artificial intelligence service that is currently developing Korean-language capability in cooperation with SK and is preparing to launch early next year.

Cortana, though, is only a small part of Microsoft’s artificial-intelligence (AI) business. Lee said the American tech giant aims to commercialize AI for everyday use under its broad vision of “AI democratizing.” Notable examples include tools like Skype Translator, which provides simultaneous language translation on its video and voice call service.

Microsoft is even applying AI to its office productivity suite, providing users of Word and Excel with tools not only to correct grammar and spelling but also give tips and inspiration on writing.

While strides in AI development may add convenience to people’s lives, concerns about the overreaching power of such technology still resonate with people, especially in Korea, where early this year, the computer algorithm AlphaGo handily defeated the country’s top Go player Lee Se-dol in a high-profile match.

“It’s not about having AI that beats humans in games; it’s about humans and machines working together to make the world a better place,” said Hsiao-Wuen Hon, corporate vice president of Microsoft Asia-Pacific R&D Group and Microsoft Research Asia. “There is no sign of [AI exceeding human intelligence] since for every AI, there is always a team of scientists.”

Lee added that securing jobs for people even after wide implementation of AI devices and robots remains a major hurdle to overcome. American companies like Google, IBM and Microsoft have formed a consortium to discuss the issue of potential job loss as more companies adopt AI.