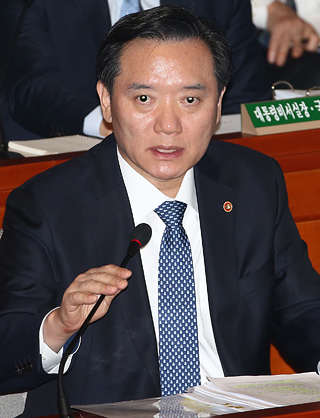 Justice Minister Kim Hyun-woong said Thursday he would recommend President Park Geun-hye subject herself to investigation in the scandal over the influence exerted by her controversial friend Choi Soon-sil if necessary, a remark that contradicted his previous position of a week ago.

Speaking before lawmakers at the National Assembly, Kim said he would review the need for an investigation into his boss if he felt doing so was needed “to find the truth,” and ask Park to accept his recommendation.

“If President Park volunteers herself to be investigated, then an investigation with no limitations could be executed,” continued the former prosecutor.

Last Thursday Kim said a majority of legal opinions held that the president could not be subject to investigation because of her immunity from criminal prosecution under the Constitution.

As the president’s approval rating plunged to an all-time low of 9.2 percent, demands that Park be investigated are coming thick and fast.

The minister’s comment was echoed by Kim Byong-joon, who was nominated by Park as prime minister Wednesday.

Kim, a Kookmin University professor and a former presidential policy secretary for in the Roh Moo-hyun administration, told reporters in his first media briefing as prime minister-designate that prosecutors could investigate the president in the so-called Cho-Gate scandal, which has revealed a shocking level of influence by Park’s longtime friend in state affairs.

“There are different interpretations of the Constitution (regarding the president being subject to investigation),” Kim said. “My position is that an investigation is possible.

“Everyone, including the president, is equal before the law,” he added.

Kim said as it would involve the president, how the investigation would be carried out should be determined “discreetly.”

The remarks about President Park being investigated while still in office came after An Chong-bum, former Blue House senior secretary for policy coordination, reportedly told prosecutors that the controversial Mi-R and K-Sports foundations were created on the direct orders of Park and that he had reported to her about their management and collection of donation collection process for them.

An’s reported confession, which contradicted his previous stance that he was not involved in the donation collection process or the management of the foundations, could put Park at the dead centre of the scandal over the foundations, which amassed a staggering 77.4 billion won ($67.75 million) just days after their launches.

The foundations are suspected of being started as slush funds for the president after she leaves office. If An acknowledged his involvement in the donation collections from conglomerates at the behest of the president, she would face accusations of abuse of power.

An was brought to the prosecutors’ office Thursday morning from Seoul Southern Detention Center for a second round of questioning.

Prosecutors are expected to file a pre-trial detention warrant for An with a court Friday on charges of strong-arming companies to make contributions to the two foundations. If the court grants a warrant, prosecutors have 20 days to indict him while keeping him in jail.

The Seoul Central District Court held a review session to decide whether or not to grant a pre-trial detention warrant sought by the prosecutors for Choi Soon-sil, who underwent three days of grilling under emergency detention. Prosecutors filed the warrant Wednesday on charges that she had abused a Blue House official’s power and attempted fraud.

Prosecutors suspect that Choi and former presidential secretary An were accomplices in their plot to strong-arm conglomerates to contribute to the Mi-R and K-Sports Foundations.

Prosecutors are expected to further question Choi to add more charges for indictment while keeping her detained for the next 20 days if the court grants the warrant.

The court was still deliberating as of press time Thursday.