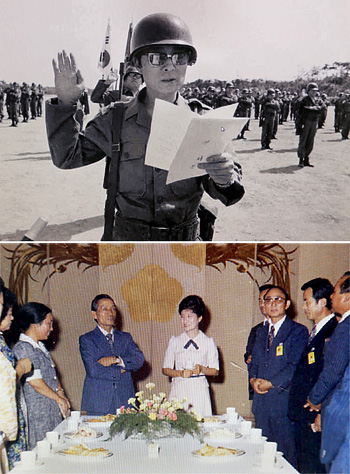 Top: Choi Tae-min, president of Daehan Guguk Sipjagun (literally “Korea Saving-Nation Crusaders”), takes an oath at a ceremony vowing to eradicate communism on May 22, 1975, days before the official launching of his group. Bottom: Choi, third from right, meets with then-President Park Chung Hee, center left, and his daughter, Park Geun-hye, center right, on Sept. 5, 1975, at the Blue House along with other members of Daehan Guguk Sipjagun. [JOONGANG PHOTO]

In a two-part series, the Korea JoongAng Daily will run excerpts of Choi Tae-min’s memoir, written in 1988 by Tahk Myeong-hwan (1937-94), a Korean expert on cults. Choi Tae-min is the late father of Choi Soon-sil, who allegedly had access to top-secret national security documents, influenced administration personnel appointments, strong-armed conglomerates into donating lavish sums to foundations and was involved in major decisions, all primarily through her personal relationship with President Park Geun-hye. -Ed.

According to various records, President Park Geun-hye's relationship with Choi Soon-sil stems from Choi Tae-min, who first met Park after her mother, the former first lady Yuk Young-soo, was assassinated in 1974. Today, Choi Tae-min is remembered as Park’s political mentor, aside from the fact that in the early 1970s, he established his own cult, Yeongsegyo. Literally meaning “Spiritual Life,” the cult combines tenets of Buddhism, Christianity and Korea’s Confucian-shamanist movement, Cheondoism.

Tahk Myeong-hwan, the author of Choi Tae-min’s memoir, worked for a Protestant newspaper before founding his own research center on cults. Over the following decades, he ceaselessly faced murder threats from numerous groups, including in 1985 when his car was bombed. In 1994, he was assassinated by a religious fanatic. His son currently runs a monthly publication on modern religions.

Tahk first met Choi in 1973 at a log house near Mount Bomun in Daejeon, 89 miles southeast of Seoul, where Choi had been temporarily living. Tahk had seen an advertisement in a local newspaper promoting a cult that Choi founded, Yeongsegyo. In the ad, Choi was described as the “royal messenger” of the spiritual world. This was before Choi changed his name from Won Ja-kyeong.

As Tahk took his first step into the house, he realized that circles of multiple hues were drawn on the walls. There were scores of other visitors who said they also came after seeing the same ad. Among them were leaders of new religious cults and shamans. Choi faced a wall and chanted a mantra, suggesting that others do the same. “Namujabi johwabul: It will heal all your illnesses,” he proclaimed.

Choi later moved to another location in Daejeon and hung a sign outside his office that read “Spiritual World Royal Messenger.” For Tahk, Choi seemed like a shaman. In the ads Choi ran in local papers, he claimed to be a messenger from the spiritual world’s creator, adding that he came to this world to realize Buddhism’s enlightenment, Christianity’s descent of the Holy Spirit and Cheondoism’s innaecheon, a doctrine teaching that all people are heaven.

In the memoir, Tahk says Choi “had spiritual power” and was a powerful shaman. One peculiar aspect of Choi, wrote Tahk, is that he had the power to intimidate other shamans, adding they just “froze” when they were near him. Tahk said that shamans who wished to be disconnected from the spiritual world would come for his help, and leave absolutely “cured,” no longer channeling transcendental energies.

One day in 1974, Choi called Tahk and suggested they meet at a bakery in front of Ewha Womans University. Solemnly, Choi claimed that “the Korean race has a special mission” and that he had come to this country as an envoy of the imperial messenger. They later met a few more times, but eventually lost touch, though not for long.

In 1975, Tahk was flipping through the newspaper one day when an article on the Daehan Guguk Sipjagun, literally “Korea Nation-Saving Crusaders,” caught his attention. The president was a man whose name Tahk had not heard. But his face looked familiar. It turned out to be Choi, who had changed his name from Won Ja-kyeong. Immediately, Tahk went to the group’s headquarters behind Seoul Station and called Choi. He seemed surprised.

The two met at a nearby coffee shop. Choi was not the “shabby” man he once knew. “For some reason, he was full of confidence,” recalled Tahk. And it was not long before he realized why.

Choi confided he was “working with” current President Park Geun-hye, who at that time was the de facto first lady after her mother was assassinated a year before in 1974. Tahk was at a loss for words. He began to speak with several of his acquaintances about Choi’s past. Soon after, a state intelligence agent called him, telling him to “watch out.” Tahk felt he was being threatened.

One day, when Tahk was outside Seoul on a business trip, Choi dropped by his office and left a letter, which partially read: “I’m not running the group with any kind of religious cult or doctrine. It’s purely anticommunist. But I heard from several pastors that you’ve been slandering my group. I was really upset. I dropped by but found you weren’t here. I want to see you.”

Choi claimed he was a “pastor,” though he had not even received any theological education, Tahk said. It was an era when people who paid 100,000 won (approximately 944,000 won today, or $827) could receive the laying on of hands, and Choi seemed to have got his from the Presbyterian Church of Korea. Members of the Korea Nation-Saving Crusaders wore khaki-colored military attire, which had cross-shaped stars on the shoulders. At first glance, they looked as if they were generals in the army.