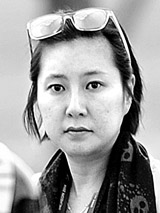 Jang Si-ho, the niece of President Park Geun-hye’s friend Choi Soon-sil, who sits at the center of a national scandal concerning her undue influence over the president and top state affairs, was banned from leaving the country by prosecutors on Thursday.

Jang, 37, is the daughter of Choi’s older sister, Choi Soon-deuk, and is alleged to have risen in the ranks of the sports industry and made extravagant profits by using her ties to Choi.

Jang, who was an equestrian athlete, is the de facto head of the Korea Winter Sports Elite Center, which has been at the center of controversy in recent days when it was revealed that it received 670 million won ($587,737) in government funds from the Ministry of Culture, Sports and Tourism before the official opening, an amount government sources say is unusually large. The center aims at training young skaters and offering jobs to professional athletes after they retire from sports.

As additional allegations surround the Choi family, a prosecutorial investigation into “Choi-gate” may be widening to involve the whole family. Choi was taken into custody by the prosecution on Monday.

Jang’s sports center is also alleged to have received some 500 million won in funds for its sports camps from Samsung Electronics from September of last year to February.

Jang is additionally accused of using her ties to Choi to secure a deal to organize an international event this year for K-Sports Foundation, where Choi is the suspected head, which was also sponsored by the culture ministry.

The Sports M, where Jang is allegedly in charge, took over the project only three months after its foundation.

In July of last year, Jang created a company called Nurim Agency, not unlike her Korea Winter Sports Elite Center, which took charge of organizing the 53rd Korea Sports Awards event for the culture ministry in October last year.

“The company is to take over souvenir production and other auxiliary businesses related to the PyeongChang Winter Olympics in 2018,” said an employee of the agency.

Jang is also accused of securing a deal to provide sportswear for the athletes who were training for the Olympics in Korea.

“I drove Jang to Pyeongchang County, Gangwon, often this year,” said a confidant to Jang on the condition of anonymity. “When I asked her why she needs to go to Pyeongchang so often, she said, ‘It’s because I am providing all the sportswear for the athletes there.’”

Allegations that Choi attempted to win a roughly 150 billion won contract with PyeongChang Organizing Committee via a Swiss construction company to build stands and tents for the viewers surfaced, as well. The Blue K, a shell company reportedly headed by Choi and set up in Korea and Germany, met with the executive managers of the Swiss construction company Nussli in January. The Blue K signed an MOU with Nussli, allegedly in order to win a 150 billion won construction contract for the Olympics.

An Chong-bum, former presidential senior secretary for policy coordination, who was summoned by prosecutors on Wednesday, and Kim Jong, former second vice minister of culture, sports and tourism, were reportedly present at the meeting, as well.

Cha, accused of using his ties to Choi to plan high-profile cultural events and win extravagant government funds for projects at the culture ministry, also won a 4.5 billion won contract to conduct research for LED lighting for the ice rink at the PyeongChang Winter Olympics.