Sales of imports rebound with Mercedes leading the way

Sales of imports rebound with Mercedes leading the way 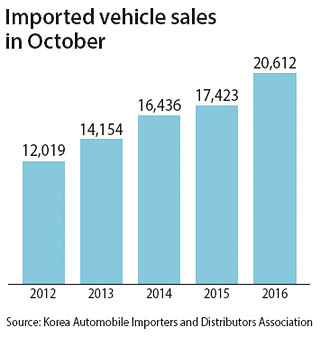 According to the Korea Automobile Importers and Distributors Association on Friday, foreign auto makers sold 20,612 units in October, up 18.3 percent year on year. Compared to the previous month, sales advanced 22.9 percent.

“A new-car effect among some of the imports and aggressive promotions boosted imported car sales in October,” said Yoon Dae-sung, executive managing director of the Korea Automobile Importers and Distributors Association.

After notching up their best monthly sales ever last December - 24,366 units - foreign car makers stumbled in 2016, greatly affected by the dent in the reputation of German cars. Volkswagen Group was embroiled in an emissions rigging scandal from September last year, resulting in a ban on sales of popular models by Volkswagen and Audi, both brands under the Volkswagen Group.

But as Hyundai Motor and its sister company struggled in the latter half of the year, imports gradually saw a recovery.

The performances of the two automakers were affected by strikes at factories. Hyundai and Kia’s share of the local auto market fell to 58.9 percent in October.

“Even considering the effects of delayed production due to labor walkouts and a recent typhoon halting factory operations, a plunge of 30 percent in Hyundai Motor’s local sales is steep,” said Jeon Jae-cheon, an analyst at Daishin Securities. “I think the fall is due to the end of a cut in the individual consumption tax, which had buoyed sales.”

In the meantime, Mercedes-Benz has solidified its top ranking among imports. The company sold 6,400 units last month, the first import to surpass 6,000 monthly sales. The popularity of the new E-Class contributed to the sales boost, as the company released an all-new version of its sedan for the first time in seven years.

BMW was the second most popular brand, selling 5,415 cars. The remaining top five rankings were dominated by Japanese auto brands such as Lexus, Honda and Toyota. Audi and Volkswagen were pushed out of the top 10 import brands. Audi sold 475 cars and Volkswagen sold only 30.