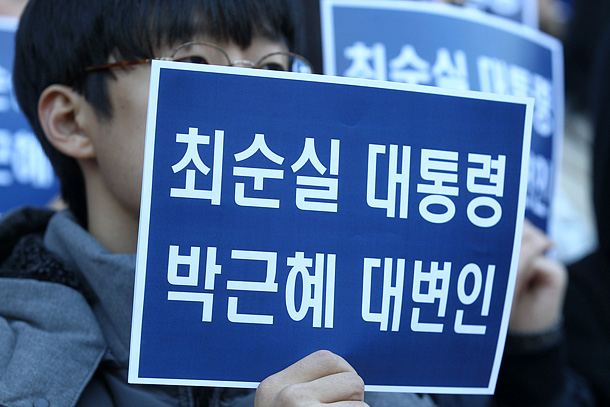 To enter the main building of the Central Government Complex in Seoul, you have to walk 11 steps. Once you reach the top, you can see the writing of the former president, Park Chung Hee. It is hard not to notice the marble plaque hanging at the center. “When the next generation asks us what we did for them and for the country, we should be able to honorably say without hesitation that we worked and worked, believing in the country’s modernization as our religion.”

I want to ask President Park Geun-hye if she is honorable, as it has been revealed that her religion was not devotion to the nation but to Choi Soon-sil. President Park is still keeping mum on mounting suspicions about her shady relationship with longtime friend Choi.

In the unprecedented chaos, citizens are frustrated and angry about the president’s silence. It is simply outrageous that Blue House spokesman Jung Youn-kuk told the people to “remain calm for the nation” and that Kim Jae-won, the president’s former secretary for political affairs, said, “Please pray for the lonely president in sorrow.” In fact, it is the people who feel lonely and sad, all because of President Park Geun-hye.

Moreover, it is the Korean people who have to deal with the embarrassment. Foreign media outlets have called it “a story from a soap opera,” and a Japanese friend even asked me to recommend a restaurant to taste the beef soup that Choi had eaten during interrogation. On the other side of the 38th parallel, Kim Jong-un must be laughing out loud in his presidential palace in Pyongyang.

Park has made all 50 million citizens suffer from anger and stress regardless of their political background, attaining the long-cherished dream of “grand integration.” Those who trusted in and wished for the Park administration’s success are also furious and feel betrayed. This is not the time to stay behind the curtain and reshuffle the cabinet as she wishes. She must step forward and face the fury of the people. It is the least amount of courtesy the president could give to the people who elected her.

Park knows very well how hurtful betrayal can be. On June 25, she criticized the “politics of betrayal” and said, “The proper function of politics is caring for the people’s lives. … We must end the backward politics of siding with special interests by holding people’s lives hostage.”

What she has done already is enough to make her a bad president. But if she cannot speak up and honorably bring this case to its conclusion, she is truly a bad leader.


*The author is a political news reporter for the JoongAng Ilbo.