Genesis G80 Sport has class written all over it

Genesis G80 Sport has class written all over it 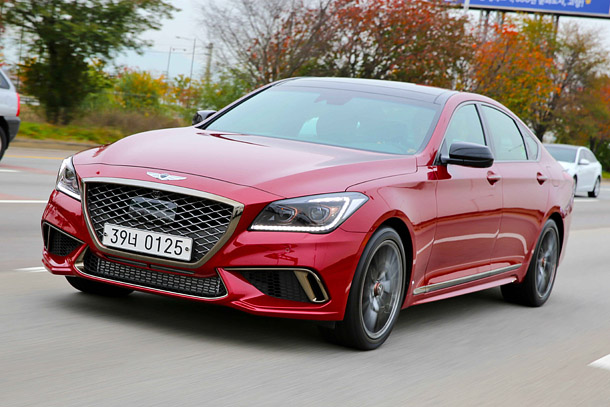 PAJU, Gyeonggi - Hyundai Motor’s attempt to convey class in its Genesis brand is realized in every nook and cranny of the G80 Sport, the brand’s first high-performance sedan.

The Korea JoongAng Daily took the vehicle for a test drive on Tuesday to the outskirts of Seoul on a range that stretches 53 kilometers (33 miles).

The high-performing car offers four driving modes: comfort for driving in a metropolitan area, which focuses on stability; sport, which shows off the sports car functions; Eco, which enhances fuel efficiency; and snow for driving on icy roads.

Two- and all-wheel drive are both available. 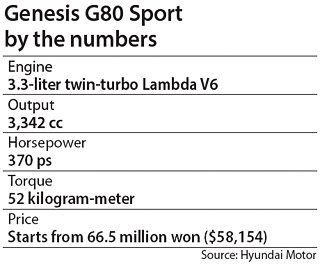 When driven in the normal mode, the vehicle’s performance is nothing less than elegant.

The vehicle feels smooth but solid, giving a luxurious vibe. It is outfitted with 17 premium Lexicon speakers, giving a full surround sound. The active noise cancellation is also superb.

However, the G80’s biggest strengths become apparent when it driven in sports mode, which will probably determine the final decision of many potential customers.

As soon as the mode is shifted to sport, the vehicle starts making growling engine sounds even when the speed is not that high. It sounds a bit muffled, but it’s enough to give the feeling of driving a sports car.

The zero-to-60 miles per hour time, or 100 kilometer per hour, has not been disclosed by the company. But in the test drive, it took less than five seconds to reach 100 kilometers per hour.

At the average speed of 150 km/h, the agile vehicle moved stably when changing lanes, speeding up and stopping. The quality of the ride was so smooth that you could easily forget how fast you were going.

The autonomous driving technology kept the car within the lane even when the drivers were hands off the wheel. The vehicle kept a safe distance from the car in front.

The design is one of the strongest features of the G80 Sport. The Genesis signature crest-shaped grill has gotten new mesh details which imbues it with a classy yet sporty look.

The turn signal in the taillight is a high-tech LED light that sequentially lights up in the direction the car is supposed to turn, a feature also found in Audi models. Glossy carbon trim wraps the interior body of the vehicle, which is often found in high-end sports car models.

Hyundai Motor hopes to appeal to younger customers with the G80 Sport because the Genesis brand has long appealed to middle-aged drivers.

“The majority of EQ900 consumers were in their 40s and 50s but the age range edged down with the G80 to people in their 30s and 40s,” said Chang Jae-hoon, director of domestic sales at Hyundai Motor.

“We’ve found through G80 Sport presales that a lot of the customers are in their 30s and 40s. Many of who had planned to purchase foreign luxury cars chose us.”

More than 70 percent of 500 pre-ordered vehicles were ordered by people in their 30s and 40s.

In terms of performance and design, the Genesis G80 Sport doesn’t fall short of the high expectations many had. The price tag reflects the car’s classiness. The G80 starts from 66.5 million won ($58,154). With a few options like the autonomous driving smart cruise control function, the price easily exceeds 70 million won.

Genesis’ domestic competitors are mainly German carmakers such as BMW, Mercedes-Benz and Audi. The G80 Sport will launch in North America, Russia and the Middle East next year.