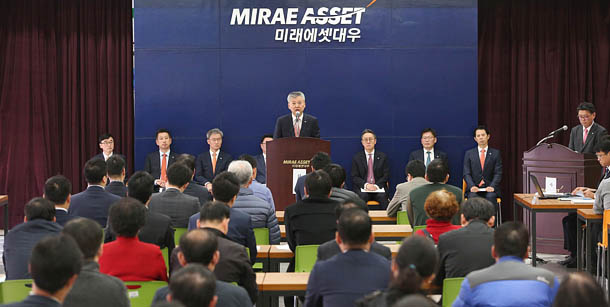 Hong Seong-guk, who served as CEO of Daewoo Securities, speaks during a Mirae Asset Daewoo shareholders meeting Friday to bid farewell as he steps down from the role at the company building in Yeouido, western Seoul. [MIRAE ASSET DAEWOO]

Shareholders of Mirae Asset Daewoo and Mirae Asset Securities voted to approve the merger of the two companies on Friday, clearing the final hurdle to become the country’s largest securities company with over 6 trillion won ($5.2 billion) in capital.

The approval made by more than two-thirds of participating shareholders came after Mirae Asset Securities was selected as the winner to take over KDB Daewoo Securities last December. After the decision, the firm’s name was changed to Mirae Asset Daewoo.

The new securities player faces high expectations and heavy challenges in a cutthroat domestic market, where fierce competition has led to low commission fees for brokerage services and limited growth.

The 2.4 trillion won bet, led by Mirae’s chairman, Park Hyeon-joo, is aimed at creating Asia’s “premier investment bank,” the company said, one that is capable of handling sophisticated investment banking, a segment where local financial companies have shown lackluster performance. 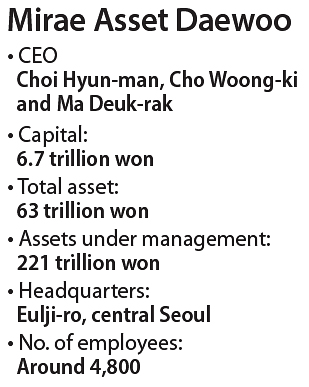 “In the same way that Goldman Sachs, Nomura Securities and local banks found their way to growth through mergers and acquisitions, we would like to pursue the same path,” Cho Woong-ki, co-CEO of the combined Mirae Asset Daewoo, said during a shareholders meeting on Friday. Cho is part of a trio of CEOs including Choi Hyun-man, formerly of Mirae Asset Securities, and Ma Deuk-rak from Daewoo.

The three chief executives will take on roles that match their expertise. Choi will take care of overall management while Cho will be in charge of investment banking and trading. Ma will be responsible for heading wealth management and wholesale banking.

Hong Seong-guk, who served as CEO of Daewoo Securities, stepped down to hand over leadership to the new executives.

Cho said the company will aim to hold the top position in terms of price-to-book ratio, signaling a focus toward enhanced valuation of the company over expansion in size. The measurement refers to the ratio of market price of a company’s shares over its book value of equity to gauge the value of a company’s assets expressed on the balance sheet.

“We are not to take away market pies in the domestic market through the merger,” Cho said. “The ultimate goal is to find investment opportunities abroad to fuel growth.”

“After the merger, Mirae Asset Daewoo will have some 200 trillion won in assets under management and 130,000 clients with sizable assets,” said Jun Bae-seung, an analyst at eBEST Investment & Securities.

“Another worry is that there should be consensus among employees from the two companies as to how the combined unit will divide and use capital,” he said, “But the deal will create synergy in the investment banking and trading sectors.”

Still, the analyst noted that “success depends on how well the two companies are combined in terms of corporate culture, values and ways of working.”

The two companies are known to have different cultures. As Mirae is a latecomer to the market, it tends to be more aggressive and values merit-based performance over seniority or tradition.

On the other hand, Daewoo Securities, with its relatively long history going back to 1970, is known to have a corporate culture that emphasizes stability.

Another challenge is the two entities’ persistently low share prices, which are lower than the purchase price of the stock purchase agreement. This has sent worries among stakeholders of the two companies. The concerns led major shareholders including the National Pension Service to abstain from the vote on Friday.