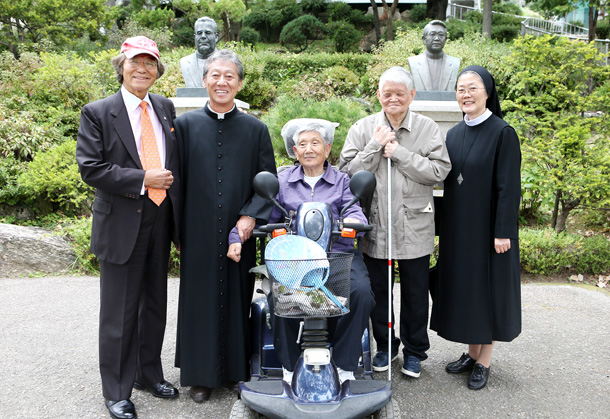 Former anchor at Tongyang Broadcasting Company, Pong Du-wan, left, poses for a picture with the head priest and residents of Saint Lazarus village in Uiwang, Gyeonggi, as he visits every week to volunteer for Hansen’s disease patients. [KIM CHOON-SIK]

“The village has served me like an army training center,” said Pong, “because it helped me mature into a better person.” Pong, 81, has kept his sense of humor and shows confidence when speaking. He became a member of the village’s support group in 1971 on the recommendation of the late priest, Lee Kyung-jae. This year marks the 46th year that he has served in the village.

Pong recounted, “We knew little about the cause for Hansen’s disease at first, and I was told to maintain a minimum two-meter (6.6-foot) distance to prevent infection. The disease was so stigmatized that immediate family members removed the names of the affected from the family register and pretended they didn’t exist.”

Pong has headed the village’s support group twice over the years and took the lead in fund-raising campaigns. He has also been in charge of all family events at the village, visiting every weekend to celebrate birthdays and attend funerals. Last year, he prepared the birthday party for a villager who turned 100.

Chun Chul-hee, a representative of the village, said, “We’ve spent a lot of time together, and Pong became a part of our family.”

When asked about the reason for his dedication, Pong answered, “This place makes me a happy person.” He explained, “St. Lazarus village is the first place I visited after losing the general election in 1988. I was broken, but the villagers said they were happy to see me more often. That gave my life meaning. When I look at Hansen’s disease patients, I realize things like becoming a lawmaker aren’t as valuable.”

The village has undergone many changes over the years. For one, the number of residents was reduced to just 10 percent of the original size of 300, as the disease rate decreased significantly.

But this was followed by a drop in support. The head priest, Park Hyun-bae, said, “We used to have roughly 24,000 sponsors but now we barely have 3,000. The village is dependent on sponsors, so we face more difficulties responding to the needs of the patients.”

“The rich are stingier when it comes to donations nowadays,” commented Pong, as he introduced one of the lesser known village sponsors to the public.

Hong Ra-hee, the wife of Samsung Group Chairman Lee Kun-hee and director of Leeum, the Samsung Museum of Art, has volunteered at St. Lazarus village for the past 37 years. “Hong visits every year on the occasion of her husband’s birthday,” said Pong.

Pong will receive an appreciation plaque from the village today during an annual award ceremony.

He said, “My dream is to continue volunteering until the age of 100 and die by the side of Hansen’s disease patients.”