Choi Soon-sil to remain behind bars for 20 days

Choi Soon-sil to remain behind bars for 20 days 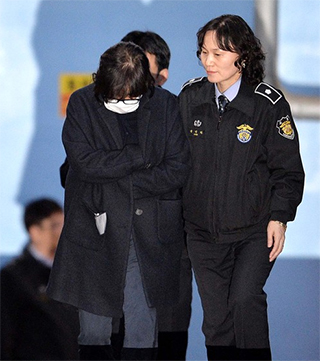 Choi Soon-sil walks to a bus after attending a court session that reviewed an application for a pre-trial detention warrant by prosecutors at the Seoul Central District Court Thursday. The court granted the warrant later in the day. [NEWSIS]

A local court Thursday night issued a pre-trial detention warrant for Choi Soon-sil, the friend of the president suspected of pulling strings from behind the scenes in state affairs, giving prosecutors 20 days to detain the 60-year-old before indicting her.

The Seoul Central District Court issued the warrant saying the “reasons and needs for the arrest warrant were satisfied.” Prosecutors will continue to detain Choi while continuing their investigation into the so-called Choi-Gate scandal, which is threatening the survival of the Park government.

The court’s decision came a day after prosecutors filed the request f on charges that Choi abused a Blue House official’s power and attempted fraud. Prosecutors suspect Choi collaborated with An Chong-bum, former Blue House senior secretary for policy coordination, to pressure conglomerates to make contributions of 77.4 billion won ($ 68 million) to two nonprofit foundations thought to have been created by Choi.

The foundations are suspected of serve as slush funds for the president after she leaves office.
On attempted fraud, Choi is accused of trying to win 700 million won in funds for two research projects from K-Sports Foundation for her own shell company, Blue K, even though she was not capable of executing the research projects.

The issuance of the warrant followed three days of grilling of Choi, who was summoned for questioning Monday, 31 hours after she returned to Korea after two months in Europe while allegations of her meddling in state affairs were mounting. On the first day of questioning, prosecutors placed Choi under emergency detention saying she was a flight risk and might destroy evidence.

For the next 20 days, prosecutors are going to further question Choi, who faces accusations of embezzlement, tax evasion and acquiring of classified information from the Blue House. She is also suspected to have pressured Ewha Womans University to admit her daughter, Chung Yoo-ra, a dressage athlete, and give her good grades despite a poor academic performance.