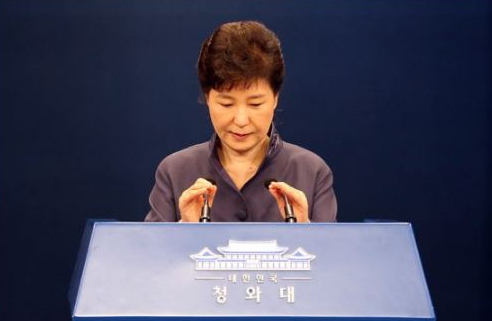 President Park Geun-hye said she will submit to a criminal investigation into allegations that she allowed a longtime friend to influence state affairs.

In a speech before the press televised live Friday, Park issued her second apology for the snowballing scandal involving Choi Soon-sil and key Blue House aides to the president.

“This entire situation is all my fault and it was caused by my carelessness,” Park said. “I truly feel my great responsibility.

Park will be the first president in the history of Korea to be investigated while in office.

Park ended the press conference without taking any questions.

She issued her first apology on Oct. 25 for having allowed Choi to review and edit her speeches. But revelations that followed showed that Choi had far more influence than she should have, to the point of being a power behind the throne. Park’s terse — it lasted 90-second — and halfhearted apology provoked a public backlash, forcing her to make a second apology Friday.

Since Sunday, Park had made several desperate attempts to salvage her sinking presidency. She appointed politicians with ties to liberal presidents of the past - of the other side of the political aisle from her conservative Saenuri Party - as her new prime minister and Blue House chief of staff.

That attempt to form a kind of national unity government backfired as she didn’t get the consent of the liberals in advance or allow them any input into whom she should hire, how strong their power would be, or how many liberals would get positions.

In the latest poll by Gallup Korea, announced ahead of the press conference Friday, Park’s approval rating nosedived to 5 percent, the lowest of all Korean presidents. During the 1997 foreign exchange crisis, then-President Kim Young-sam had a 6-percent approval rating.