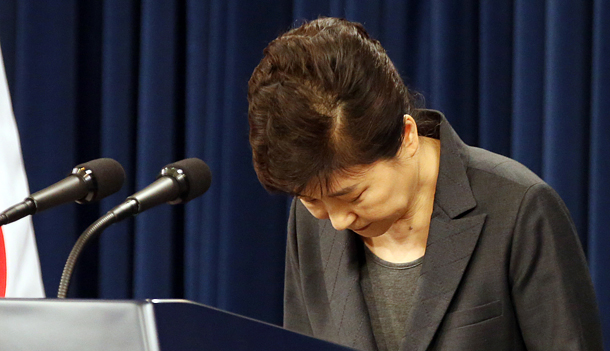 President Park Geun-hye bows in apology over a scandal over the influence exerted by her friend Choi Soon-sil in a nine-minute address to the nation televised live from the Blue House briefing room Friday. [JOINT PRESS CORPS]

In an attempt to salvage her sinking presidency, President Park Geun-hye said Friday she will submit to a criminal investigation into allegations that she allowed a longtime friend to influence state affairs.

In a speech before the press televised live Friday, Park issued her second apology for the snowballing abuse of power scandal involving Choi Soon-sil and key Blue House aides to the president.

“This entire situation is all my fault and was caused by my carelessness,” Park said. “I truly feel my great responsibility.

“I will offer my best cooperation to reveal the truth and responsibility,” Park said. “I already ordered the Blue House secretariat and the presidential security service to fully cooperate with the prosecution’s probe.

“If necessary, I will also faithfully submit to the prosecution’s investigation, and I will also accept an independent counsel investigation,” Park continued. Park will be the first president in the history of Korea to be investigated while in office.

Park also made an emotional appeal that she had lived a “lonely life” by cutting ties with her family in fear of any possible influence-peddling scandals after she took office in 2013. Her father, former President Park Chung Hee, and mother, Yuk Young-soo, were both assassinated. She has a younger sister and a young brother, but they were estranged years before Park took office.

Park said she lowered her guard to Choi, because Choi befriended her during painful times in the past. Choi, 60, is a daughter of Park’s mentor, the late Choi Tae-min, who established a cult in the early 1970s.

Park, however, adamantly denied rumors that she was controlled by a religious cult linked to Choi and that a shamanic ritual took place at the Blue House.

"It is hard to forgive myself and sleep at night with feelings of sorrow," Park said. “As I realize that nothing can soothe the people’s hearts, I feel painful with a sense of shame, wondering to myself if I become the president for this.”

Park ended the press conference without taking any questions. After reading a statement for nine minutes and 20 seconds, she briefly approached the journalists and apologized again.

She issued her first apology on Oct. 25 for having allowed Choi to review and edit her speeches. But revelations that followed showed that Choi had far more influence than she should have, to the point of being a power behind the throne. Park’s terse — it lasted 90-second — and halfhearted apology provoked a public backlash, forcing her to make the second apology Friday.

In Friday’s press conference, Park offered a specific apology to the public servants and businessmen who offered help to two foundations that Choi allegedly created. “I feel extremely regretful that a certain individual apparently abused them for profit and committed various legal violations in the process.”

Choi and Park’s former senior policy coordination secretary, An Chong-bum, are accused of having pressured conglomerates to make contributions of 77.4 billion won ($68 million) to two cultural and sports nonprofit foundations allegedly controlled by Choi and her associates.

The latest media reports raised suspicions that Park had personally met with tycoons of the country’s biggest conglomerates and pressured them to make donations.

Park urged the government to return to normal and end the administrative vacuum created by the scandal. “I will more frequently communicate with the elder statesmen of our society, religious leaders and heads of the ruling and opposition parties,” she said, a de facto rejection of opposition demands that she step aside from running the country. “I will respect the demands of the people and the National Assembly with a heavy heart.”

Since Sunday, Park had made several desperate attempts to salvage her sinking presidency. She fired scandal-plagued aides from the Blue House. She appointed politicians with ties to liberal presidents of the past — from the other side of the political aisle as her conservative Saenuri Party — to be her new prime minister and Blue House chief of staff.

That attempt to form a kind of national unity government backfired, as Park didn’t get the consent of the liberals in advance or allow them any input into whom she should hire, how strong their power would be or how many liberals would get positions.

Although the Blue House tried to arrange a meeting between Park and the heads of the ruling and opposition parties, the main opposition Minjoo Party of Korea said her statement was insufficient and vowed to start a movement to force her resignation.

“Unless she withdraws her nomination of Kim Byong-joon as prime minister and takes her hands off the helm of the government, we will start a movement to oust her,” Chairwoman Choo Mi-ae of the Minjoo Party said.

Rep. Park Jie-won, acting head of the People’s Party, said the president’s apology was inappropriate. He said Park was overtly giving a direction to the prosecution on how to proceed with the probe.

Ahn Cheol-soo, founder of the People’s Party, said he will start an online signature drive to press Park to resign.

It remains to be seen how the prosecution will proceed with an unprecedented investigation into a sitting president. Although Article 84 of the Constitution says, “The president shall not be charged with a criminal offense during his tenure of office except for insurrection or treason,” it does not bar a president from being questioned as a witness or a suspect.

Perhaps the closest precedent would be an independent counsel probe into President-elect Lee Myung-bak in February 2008 over his alleged role in an investment fraud scandal. Questioning took place just eight days before Lee’s inauguration. He was visited by investigators and questioned at an undisclosed location for three hours.

Former President Roh Moo-hyun appeared before prosecutors personally in April 2009 over a corruption scandal. He was questioned for over 10 hours by top prosecutors.