Secretary of the president is arrested for official leaks

Secretary of the president is arrested for official leaks 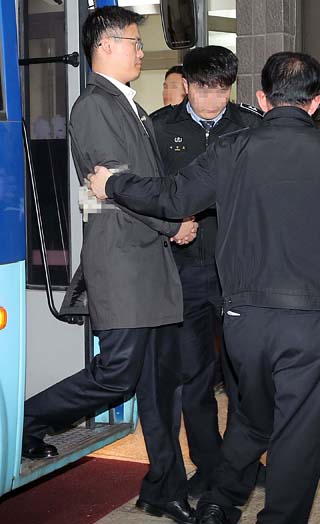 Jeong Ho-seong, a former personal secretary of the president, arrives at the prosecutors’ office Friday morning hours after he was arrested. [NEWSIS]

Jeong Ho-seong, 48, a former personal secretary of President Park Geun-hye who worked in her office for 18 years, was arrested Thursday night on allegations of leaking classified state documents to Choi Soon-sil, the presidential friend suspected of secret involvement in government affairs.

The trio left the presidential office Sunday when Park accepted their resignations in an attempt to appease growing public ire over the influence exerted by her friend.

Jeong’s late-night arrest Thursday came eight days after broadcaster JTBC raised accusations he was highly involved in the scandal. The broadcaster, which exclusively got hold of a tablet computer allegedly owned and used by Choi, reported that several documents found on the tablet were created by an ID that Jeong used at the Blue House. JTBC is an affiliate of the Korea JoongAng Daily.

On Friday afternoon, prosecutors filed a pre-trial detention warrant for An Chong-bum, 57, former presidential senior secretary for policy coordination, whose resignation was also accepted Sunday. He was subject to emergency detention Wednesday night.

An is suspected to have collaborated with Choi to pressure conglomerates to make contributions of around 77.4 billion won ($68 million) to two nonprofit foundations thought to have been controlled by her while he was working as presidential senior secretary of economic affairs between June 2014 and May 2015.

Park’s critics have raised suspicions that the foundations were to serve as slush funds for the president when she leaves office in February 2018.

A local court will review the detention warrant for An today.

An is said to have told prosecutors during questioning on Wednesday that the Mi-R and K-Sports foundations were created on the direct order of Park and that he had reported to her details of their management, including the donations.

Prosecutors said they will investigate whether he was involved in leaking confidential government reports to Choi, an accusation raised by Lee Sung-han, former executive of Mi-R Foundation, in an interview with The Hankyoreh.

Lee claimed Chung shared the reports with a shadowy group of around five people, which included Cha Eun-taek, a director of TV commercials.

Cha is the de-facto head of the Mi-R Foundation, which was established with the approval of the Ministry of Culture, Sports and Tourism last October. It received 48.6 billion won in donations from 19 conglomerates within two days of its launch.

Prosecutors said they are planning to summon Cha, who is currently in China, for questioning next week.

On Thursday night, the Seoul Central District Court granted a detention warrant for presidential friend Choi, giving prosecutors 20 days to detain the 60-year-old before indicting her. The court ruled that the “needs for the detention warrant were satisfied.”

Choi was subject to emergency detention Monday night over fears she might flee or destroy evidence. Choi faces accusations of embezzlement, tax evasion and acquiring classified information from the Blue House. She is also suspected to have pressured Ewha Womans University to admit her daughter, Chung Yoo-ra, a dressage athlete, and give her good grades despite poor academic performance.

Chung’s father is Chung Yoon-hoi, who worked as President Park’s chief of staff from 1998 to 2004 when she was a lawmaker. He and Choi got divorced in 2014.

Prosecutors did not mention any plans to summon Choi’s 20-year-old daughter. Choi’s lawyer said Choi pled for him to “protect” her. The lawyer urged Koreans numerous times through the media to “understand” her circumstances, saying she is too young to “live with the hardships of the times.”