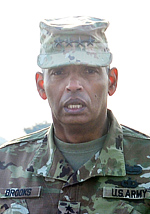 A U.S.-led Terminal High Altitude Area Defense (Thaad) anti-missile system battery will be deployed in South Korea within eight to 10 months and it will be larger than the one in Guam, said Gen. Vincent K. Brooks, commander of the U.S. Forces Korea (USFK).

The remark was made Friday morning during a seminar hosted by the Associated of the Republic of Korea Army at Koreana Hotel in Jung District, central Seoul.

“You’re gonna see the deployment of a Thaad battery,” Yonhap News Agency quoted him as saying. “This is an alliance decision. It will come in the next eight to 10 months. That is an Army unit and… a larger configuration than the one in Guam.”

The announcement was one of the most specific outlines so far concerning exactly when Thaad will touch down on South Korean soil. In July, Seoul and Washington announced they would deploy the anti-missile system in Seongju County, North Gyeongsang, about 270 kilometers (168 miles) south of Seoul, by the end of next year in order to defend the nation from North Korean threats.

But Gen. Brooks denied any need for the South to equip itself with tactical nuclear weapons, saying that would “complicate the situation and is not militarily necessary,” according to Yonhap. He reportedly added that strategic assets will be immediately sent to the Korean Peninsula to counter North Korean provocations.

The South’s nuclear armament has been an ongoing issue, especially after the North conducted its fourth nuclear test in January and its fifth in September, on top of conducting over 20 ballistic missile launches this year, in violation of UN Security Council resolutions. A group of members from the ruling Saenuri Party declared in a joint statement in September that “in order to protect peace,” Seoul needs to consider “all measures” to deter North provocations, “including nuclear armament for the purpose of self-defense.”

In Friday’s seminar, Gen. Brooks added that Washington plans to double the number of Apache helicopters deployed in the South, and that it will be the same amount as what the South Korea’s military will soon have in total.

The Korean Army is planning to purchase 32 more AH-64E Apache helicopters by early next year, up from the current four.