National team captain is ready for next fight

National team captain is ready for next fight 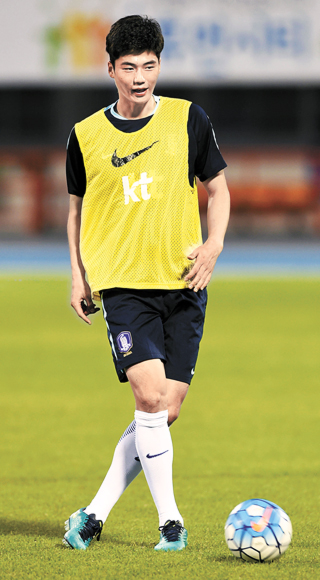 Ki Sung-yueng, the captain of the Korean football team, says the team will be ready for the World Cup qualifying match against Uzbekistan. [NEWSIS]

Ki Sung-yueng, captain of the Korean national football team and a midfielder in the English Premier League’s Swansea City, has vowed to learn from his past mistakes and move forward as his national team aims to gain its ninth consecutive World Cup berth.

But looking back at his team’s below-par performance earlier this month against Qatar and Iran, the captain says the exhausting travel schedule hampered their ability to play at their peak level.

In the regional qualifiers for the 2018 Russia World Cup, Korea is ranked third in Group A with two wins, one draw and one loss after suffering a heartbreaking 0-1 defeat to Iran last month.

While the winner and runner-up of the group will automatically gain berth in the World Cup, the third-place team will have to compete in a regional playoff and subsequently in an inter-continental playoff in order to earn tickets to Moscow. This means it is inevitable Korea will finish the final round at least second in the group.

Yet the 0-1 loss to Iran does not bode well as Korea continues its campaign. Against Iran, Korea was dominated in every aspect of football imaginable, but according to a report by the Asian Football Confederation (AFC), Ki and his compatriots from Europe were utterly exhausted when they arrived in Iran for the match as they were forced to spend a significant amount of time in the air.

“I have to fly from London to Korea to play a game and then fly again to Iran,” said Ki according to the AFC report. “Maybe some people will say it’s an excuse but it is hard to play in these games.”

And the numbers do back up his argument.

To return to Korea from England to play against Qatar, Ki had to travel 8,851 kilometers (5,500 miles), only then to travel to Tehran, Iran, which is 6,550 kilometers from Seoul, followed by a flight back to England for an additional 5,489 kilometers, which means he traveled roughly half the circumference of the planet in less than two weeks.

Of course, the captain did not shy away from admitting that Iran was essentially superior to Korea. “Iran is very organized and defensively they are very good, and physically they are a big team,” he said. “We didn’t handle that very well in the game.”

As for Korea’s preparation for the upcoming matches this month, the recently unveiled roster had some notable changes, especially in its defensive lineup. About the roster, skipper Uli Stielike said he’s given emphasis on full backs as well as mobility up front.

When asked about his thoughts on the roster, Ki said, “I think Stielike had something in mind to make these changes. We have to win the match [against Uzbekistan] and as captain, I will be stressing this to the players, but I think everyone is aware of the gravity of the game. We will do our best to fix what went wrong last time and move up in the standings to second.”