Are China’s new jets for real?

Are China’s new jets for real? 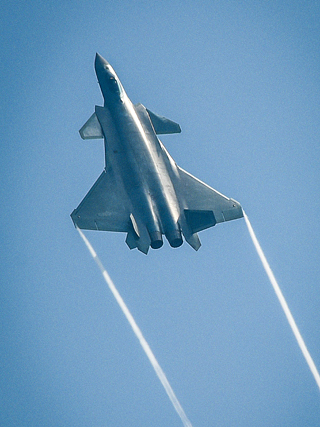 There was a brief but impressive show of new U.S. aircraft technology this week. The problem is that the planes belong to the Chinese military.

Aided in large part by espionage against the Pentagon and U.S. firms, the People’s Liberation Army air force unveiled its new J-20 stealth fighter, which it says is a so-called fifth-generation fighter like the American F-22 and F-35. Two J-20s flew for just a few minutes at an airshow in Zhuhai on Tuesday, leaving military experts of two minds about what the J-20 is actually capable of.

While Bradley Perrett of Aviation Week warned it was “clearly a big step forward in Chinese combat capability,” Greg Waldon of the consultancy FlightGlobal said the big reveal of the flyby was “we learned it was loud.”

If the sparse details released by the Chinese and speculation of military insiders are accurate, the plane could present some problems should the cool war in the South China Sea heat up. The jet is said to have a longer range and more armament than the competing U.S. fighters, and while it doesn’t likely have the computer systems to pose a threat to them, it could make easy targets of American refueling and surveillance craft.

But as far as U.S. officials are concerned, these capacities exist only in rumor. This is a common theme in all the Western fretting about China’s cutting edge military prowess: nobody knows whether any of it is real.

Consider the Chinese military’s “carrier-killer missile,” the DF-21D. It was unveiled last year, during China’s celebrations marking the 70th anniversary of the end of World War II, amid a hype campaign calling it the fastest missile in the world. In the U.S. military, there is speculation that it has radar that can see over the horizon and a maneuverable warhead that allows precision guidance as it nears its target. This has some experts warning that the age of the American aircraft carrier is over.

But, again, there is little proof that this missile is real or that China has any of the capabilities that so worry the West. The same can be said of the YJ-12 missile, which is said to fly just above the surface of the water to avoid radar tracking. While we’ve seen these weapons in parades, demonstrations and air shows, the real question is what’s inside.

“Chinese ‘hardware’ continues to improve dramatically, but the caliber of the ‘software’ supporting and connecting it remains uncertain and untested in war,” noted analyst Andrew Erickson in the National Interest. “The missile components of the DF-21D already are proven through multiple tests, but China’s ability to use the missile against a moving target operating in the open ocean remains unproven.”

So what does this all mean for long-term U.S. strategy (beyond, of course, getting better at protecting our military secrets)? If we take the threat of Chinese advances seriously, the first step would be to take a tough look at plans to build 10 new Ford-class supercarriers, which would be quite vulnerable if the Chinese are really as far along as some fear.

This doesn’t mean giving up on carriers — as forward-based platforms that don’t rely on allies for hosting aircraft, they remain vital. But the wiser fiscal and preparedness choice may be stopping after the three supercarriers now under construction are completed and renovating five or so of the existing Nimitz-class, which are still far and away the terror of the seas. Through smarter management of maintenance and crew rotations, eight craft could conceivably do as effective a job patrolling the globe as the Navy’s hoped-for 10. (Carriers will always, alas, be more vulnerable than fake islands.)

Another idea is to make the U.S. fleet more dispersed and effective through emphasizing “distributed-lethality warfare.” This would involve making far more ships in the fleet — including those responsible for reconnaissance, specialized missions such as mine dispersal, and protecting aircraft carriers — capable of both striking the enemy and defending themselves. This gives the enemy more threats to protect against and more targets to eliminate. To some extent the Navy seems to be considering the approach; for example, it has upgraded the armor, weaponry and anti-torpedo capability of its troubled littoral combat ship.

Inevitably, long-term military thinking is an exercise in predicting what former Defense Secretary Donald Rumsfeld called known unknowns. The J-20 flyby showed only how little we know about China’s drive to become a cutting-edge military.


*The author writes editorials on national security, education and food for Bloomberg View.