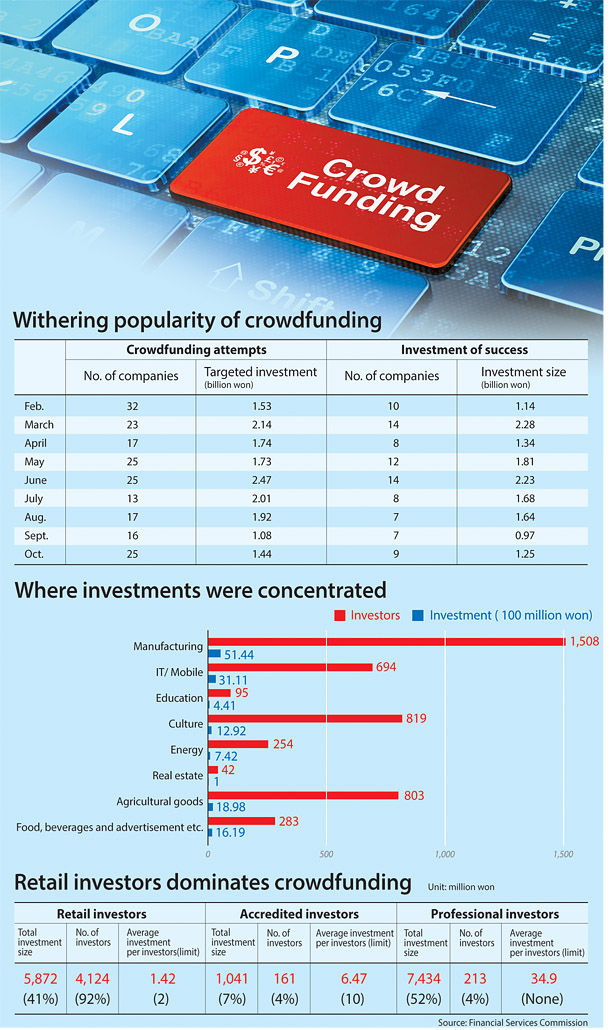 The nation’s financial regulatory agency announced plans on Sunday to loosen regulations on crowdfunding by allowing funds to be advertised on social media platforms and raising investment limits.

In response to criticism that its regulations were limiting investment opportunities for small operations, the Financial Services Commission said Sunday that it would bolster crowd-funding investment for start-ups as well as small and midsize companies.

Under current regulations, investors can only access information about different crowdfunds through the websites of brokers managing the investment. The new regulation will allow these funds to be advertised on social media platforms like Facebook and search engines like Naver to attract more retail investors.

Especially in the case of companies with strong potential, the government will support online investor relation activities by actively attracting foreign investors and provide information on crowdfunding to overseas angel investor associations.

As of Oct. 31, 92 percent of those who invested in crowdfunds have been retail investors, whereas accredited and professional investors only accounted for 4 percent each, according to the commission.

The government hopes loosening the regulations that label investors as accredited will encourage larger investment.

The government will also make it easier for start-ups which gain crowdfunding to be traded on the over-the-counter stock market exclusive for start-ups, the KRX Startup Market, which officially launches next week.

The decision comes as interest in crowdfunding has recently been weakening. In the first nine months since the government promoted the crowdfunding system, roughly 6,000 investors have invested 14.3 billion won in 89 companies, the Financial Services Commission said.

The success of crowd funding actually attracting investment has been 46 percent. Although the government has considered this a huge success when compared to the United States, whose success rate was around 20 percent in the early stage of adopting crowdfunding, there have been growing concerns about dwindling interest.

After reaching a peak in July with a success rate of 61.5 percent, crowdunds able to achieve their targeted investments have been falling. In October, that rate fell to 36 percent, raising the need for aggressive deregulation to draw in more investors.

Most of the investments have been concentrated in the manufacturing industry, followed by information and mobile technology.

“The goal is to make crowdfunding more accessible so that anyone can take interest by lowering the regulation on advertisement and providing more information on the companies [seeking investment] through crowdfunding,” a Financial Services Commission official said.