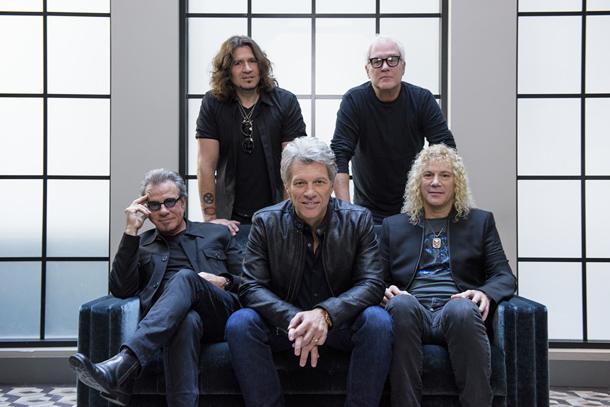 Members of Bon Jovi, front row from left, Tico Torres, Jon Bon Jovi and David Bryan; and back row from left, Phil X and Hugh McDonald, during a promotional shoot for their new album “This House is Not for Sale” at the Sixty SoHo Hotel in New York. [AP/NEWSIS]

NEW YORK - Jon Bon Jovi has been waiting for a cue from Mick Jagger to know when it’s time hang up his microphone.

“At least I know where the end zone is,” Bon Jovi joked.

But then after hearing that Chuck Berry is still playing music at 90, the 54-year-old rocker threw his hands up.

As Bon Jovi releases their 14th studio album, “This House Is Not For Sale,” the frontman admits that he’s thinking about the finish line a bit more these days. Though he has no intention of slowing down anytime soon - Bon Jovi goes on a world tour in February - he doesn’t see the band performing in their 70s, a la the recent Desert Trip concert series in Indio, California, featuring Bob Dylan, Paul McCartney, the Stones and more.

“I am so proud and in awe of them. And that was the music of our youth,” Bon Jovi said. “But it hurts here and here,” he added, pointing to his neck and back.

Besides, even if he stops touring at some point, he knows the music will always be there.

“This is the closest thing I will ever know to immortality,” Bon Jovi said.

The new album not only adds to the band’s catalog, it also makes a statement, particularly about the difficulties they endured since the release of their last album, 2013’s “What About Now.”

They flirted with the possibility of leaving their longtime music label, Universal Music Group, when it seemed the sides couldn’t come to terms.

“Though we were the longest tenured and biggest-selling artist on the label, we had come to a crossroad. We had to come to terms to what the future would look like,” he said.

They ended up working out a deal, but “The Devils in the Temple,” off the new album, paints a negative view of the music industry now.

Their record label challenges didn’t compare to their most seismic jolt - the departure of guitarist Richie Sambora, who had been with the group since its inception, during their tour for that album. Sambora, who in the past had battled substance abuse, was almost as popular with fans at Bon Jovi himself.

“He decided not to show up one night. But we had 80 more shows and there’s 120 people whose families depend on the paycheck for a year, and the record company that was having an album come in at No. 1 that Tuesday. That was one of those days,” he said.

He was replaced by guitarist Phil X, who felt the disappointment of fans - some held signs reading “Where’s Richie?” in the audience.

“But then the Phil X signs started to pop up,” he recalled.

It was a difficult situation for him to be in, and it remains so.

“Musically - as a guitar player, it’s one if those things where I’m not like Richie, but I’m not really me. I’m this guy in the middle that shows up and delivers and expresses the guitar parts and the vocal parts,” said Phil X. “Richie, you gotta tip your hat to his ability.”

And despite the loss of Sambora, Bon Jovi not only survived, but also has managed to thrive. The group’s ability to soldier on is represented by the photo on the album cover: It shows an old house spawning from thick roots, as if it were part of a large tree.

“A lot of history had lived in those four walls. But it was in disrepair. (And) it all came to me - this house is not for sale. That became the cornerstone of the record,” he said. “Because now it wasn’t going to be a collection of songs, it was going to a thread that was gonna take us through these last tumultuous three years.”

“Those roots are our integrity,” said Dave Bryan, the band’s keyboard player. AP