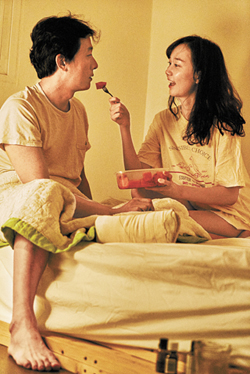 Director Hong Sang-soo, well-known for his unique style of depicting the daily lives of common people without any spectacular plot, is back with another placid film. The director’s films are known to contain numerous scenes in which actors drink alone, and many of his fans say his movies urge viewers to drink alongside the actors.

To keep those with an empty heart company, “Yourself and Yours” is based on a couple in love named Young-su and Min-jeong, played by Kim Joo-hyuk and Lee You-young. The couple, however, is not one that lives each day happily or goes through any special incidents, but one that is easy to spot around us in real life. They fight over petty things like drinking issues - Young-su hates to find out when Min-jeong stays out late drinking.

One day, he brings up the matter to Min-jeong in bed, scolding her for drinking with another man. Min-jeong, unable to stand his criticisms, decides to leave Young-su for a while and quickly heads out the door. The movie carries on with Young-su wandering around trying to get his girlfriend back.

“Where would you go if you miraculously stood up on your feet?”

“I haven’t really hoped to go anywhere by myself, but I really want to get to touch my daughter’s cheeks.”

People often make a fuss over what they don’t have, striving to own more when they already have plenty. This documentary film is about Lee Dong-woo, who had lost his eyesight, and Lim Jae-shin, who has nothing but eyesight.

One day, Dong-woo gets a phone call from a stranger named Jae-shin, who suggests donating his retinas to his friend. Jae-shin suffers from a muscle disease, unable to move his own body. Jae-shin’s offer to give over the only thing he has, his eyes, renders Dong-woo speechless.

The two men decide to set out on a journey together, Jae-shin working as the eyes of the two and Dong-woo being the two’s feet, to Jeju Island, which is possibly Jae-shin’s last journey he could savor with his eyes.

While everyone is focused on achieving or having more, the story of a man who lends a hand to give the only thing he has is bound to send warm feelings in theaters.

The film’s title, “SEE-SAW” was chosen by Lee Dong-woo himself, referring to a world he came to see through his heart after he lost his eyesight. It also indicates seesaws in playgrounds, on which riders try to form a balance with one another on each side. 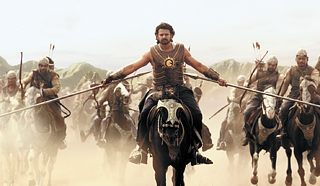 A Bollywood action flick with grand-scale war scenes is coming to Korean theaters. With unprecedented production costs for an Indian movie, the film is expected to follow other successful war movies like “300”(2006) and “Troy”(2004) as another box office hit. The film boasts a wide range of unforeseen weapons, which adds to the excitement of being absorbed into the action scenes.

Baahubali, played by Prabhas, miraculously survives after drifting towards a huge waterfall. He matures into an adult curious about the world above the waterfall, and strives to climb up the cliff. After hundreds of trials, he succeeds in reaching the top and meets Avanthika, played by Tamannaah Bhatia, falling in love with her.

Baahubali, however, has the responsibility to save Princess Devasena, played by Anushka Shetty, and he later finds out he’s the legendary warrior who has to save his empire from destruction. Facing grave responsibilities of saving the princess and his empire, Baahubali prepares for a vengeful counterattack with Avanthika.

The animated film that took 25 years to produce is reaching Korean theaters. With Avi Arad, the founder of Marvel Studios, working as the film’s producer, the animation flick is expected to mesmerize the audience through its quality display.

Based on the Japanese novel “The Adventure of Gamba” by Atsuo Saitou, which was published in 1972, the film drew attention from not only young children, but also older viewers as well. The novel was also produced into a TV cartoon, which was released in Korea in 1977.

In the story, Gamba, an adventurous wild mouse, sets out on a journey with his friends to see the ocean. During his trip, however, he passes by an injured mouse who’s under a threat of a vicious white ferret named Noroi. While many other mice look away from the poor mouse, fearing the ill-famed Noroi, Gamba and his friends decide to help the mice suffering from Noroi’s tyranny.

As the story carries out based on Gamba’s caring heart and courageousness, many families are encouraged to head to theaters to join the journey of the heroic mouse. 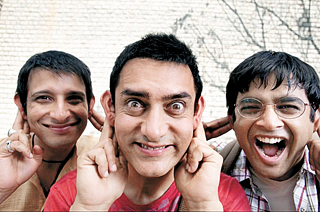 The hilarious three men who shook the world shouting, “All is well!” are back.

Imperial College of Engineering is a school that selects only the brightest minds out of 400,000 applicants each year. Out of the lucky 200 students, Rancho, played by Aamir Khan, Farhan, played by Madhavan, and Raju, played by Boman Irani, are three of them.

The three, however, are somewhat peculiar compared to their fellow schoolmates in that they strive to seek the true meaning of a happy life, not one that is planned out or evaluated by other people.

Rancho is a young man with a free soul, pretty much unoffended by what others think. He takes a shower wherever he wants, sometimes even soaping himself in the middle of the school grass field. He also cannot bear his curiosity for machines that he has to disassemble to find out how they work, even if it’s the refrigerator in the school kitchen.

Farhan is a papa’s boy who has given up on what he really wants to fulfill his father’s hope of him becoming an engineer, and Raju has the burden of having to get accepted to a big company to make a living for his poor family.

The film depicts the boys’ hilarious daily lives in the college in seek of their dreams. As they live each day, they come to think that school grades and job wages are not all that matters in life, and set out to reach their own goals, not one that others force them to achieve. 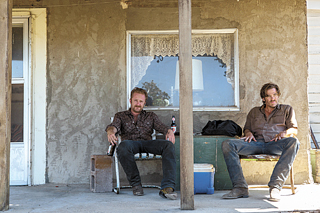 Texas brothers Toby and Tanner, played by Chris Pine and Ben Foster, stand on the edge of the cliff with loads of debt on their shoulders.

To make matters worse, the bank threatens to foreclose what’s left of their assets - the family land that their mother bequeathed to them.

Hopeless, the brothers, who had been living apart for years, reunite to save their family from being dragged deeper into hell. Their scheme is to rob branches of the bank that’s threatening to take away their land.

Victory seems to be on their side when Toby, a very calm and rational man, and Tanner, who’s ready to do anything for his brother, succeed in robbing the banks. But this is until Texas Ranger Marcus, played by Jeff Bridges, starts to chase after them.

Reviewed as “the best film of 2016 so far” by Forbes, and recognized as “a mesmerizing, modern-day western that moves with the coiled intensity of a rattlesnake ready to spring” by the Wall Street Journal, the film has received rave reviews from critics and the media.

The splendid cast is also getting much attention, with David Mackenzie, the director, praising Chris Pine for his full understanding of his character Toby. Ben Foster has also been praised for his portrayal of his tough, rebellious character.