‘Split’ bowls its way into hearts: The heartwarming drama tells refreshing tale of love for a sport

‘Split’ bowls its way into hearts: The heartwarming drama tells refreshing tale of love for a sport 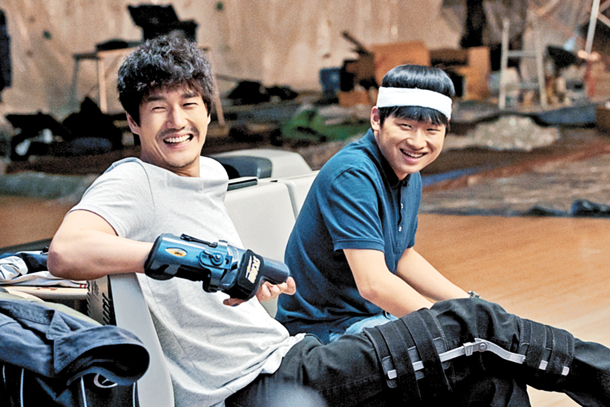 Crime and gambling-filled story lines have been a part of some of the most well-received movies domestically over the last few years. The huge success of the gambling film “The War of Flower,” which marked over 5.5 million ticket sales in 2006, when the film market wasn’t as big, proved that the underground betting world ruled by good-looking men and women with the addition of humor was appealing to moviegoers.

However, as more and more movies with similar plots have hit local theaters, people have gradually started losing interest in the genre. In addition, the repetitive scenes, scripts and mise-en-scene found in gambling films have also made the genre unattractive to many high profile actors, who used to fill the casts of the high-profile movies.

At least that was the case for A-list star Yoo Ji-tae (“Oldboy”), who continuously refused to join a gambling flick until he read the script of the upcoming gambling film “Split,” he said at a press event held in Gwangjin District, eastern Seoul, on Monday.

Referring to a situation in ten pin bowling, where a ball knocks down all the pins except for two or more non-adjacent pins, “Split” is helmed by a rookie director Choi Kook-hee (“Carnival”) and co-stars actress Lee Jung-hyun (“Alice in Earnestland”) and actor Lee David (“Unforgettable”). 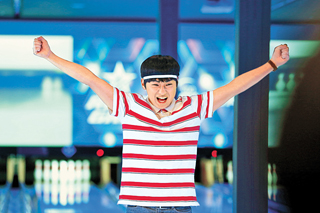 Lee David plays an autistic boy with an extreme talent and passion for bowling. [OPUS PICTURES]

The plot follows a fallen bowling pro (Yoo), who gets involved in betting with a female broker (Lee). The once-renowned and promising player falls into the underground gambling world as he no longer is able to compete with the pros after severely hurting his leg in a car accident.

Just when he is about to give up gambling, he finds an autistic boy (Lee) who is extremely talented and passionate about bowling. By involving the boy in the underground world, the fallen pro bowler and his broker’s dreams of earning a great fortune comes true.

What starts off as a drama becomes heartwarming as the characters form bonds.

Although the ex-bowler originally took in the boy for his own financial benefit, he slowly changes his mind after gaining affection towards the boy. When the former bowler’s jealousy-filled ex-rival attempts to break up the pair’s relationship, he willingly gives all of his money to get the boy back.

The boy is one of the most crucial characters in the story, as he cures wounds and makes the other characters’ lives happier.

This story grasped the heart of actor Yoo.

“I don’t mean to disparage, but I have received several gambling scripts, but I have turned them all down because they were boring and unoriginal,” said Yoo.

“However, there was something different about ‘Split.’ The script was interesting and I thought it was worth a challenge.” Yoo added, “There haven’t been many prominent bowling movies and I believe the filmmaker grasped the material for ‘Split’ very well.”

It won’t be easy for many moviegoers to be disappointed at this film, as it is a slight mixture of everything.

It includes a heart-warming story, bits of humor from the autistic boy’s unique bowling pose, tension that comes from huge gambling bets and the gratifying delight of bowling success.

When questioned where he got the concept from, the director replied, “I once went to a bowling alley and saw an autistic man who was bowling in a hilarious pose. Although his pose was absurd, his performance was strangely high.”

The filmmaker added that he couldn’t let go of the image of that man for days, which resulted in the creation of “Split.”

The filmmaker went on to explain how the characters were created.

“If there is an [autistic] bowling genius, I was sure that there would be someone who tried to take advantage of the genius’s ability. This idea led to the creation of the main protagonist.”

The film is expected to give audiences a sense of victory and sincerity throughout the 121 minutes.

The movie is slated to open in theaters on Nov. 10, and is rated 15 and over.