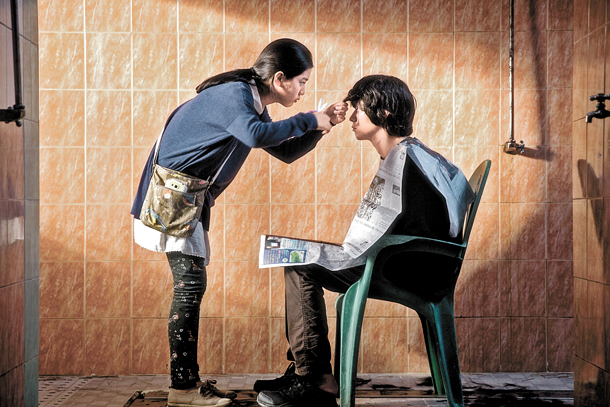 Wouldn’t it be fun if time just stopped? It’s the question director Um Tae-hwa of the upcoming fantasy film “Vanishing Time: A Boy Who Returned” asked himself when he first conceived of the script’s plot. What if everything around you just stopped, and you were the only thing in the world that ever aged?

“I have long been interested in the clash of reality and unreality and how they affect each other,” Um said during a press event held Tuesday in central Seoul for the film, which hits local theaters on Nov. 16. “I have also dealt with virtual reality and dream in my previous work, although the method of expressing the topic was different.”

“Vanishing Time: A Boy Who Returned” is a film about time travel, but unlike familiar tales of romance and whimsy like “The Time Traveler’s Wife” (2009) or “The Girl Who Leapt Through Time” (2006), the protagonist in Um’s film has no freedom to traverse through the fabric of time. Rather, he is stuck as the world around him changes.

Actor Gang Dong-won, who recently starred as a handsome criminal in “A Violent Prosecutor” plays the time traveler Seong-min. Starring as his childhood love interest, Su-rin, is 14-year-old actress Shin Eun-soo, who is making her big-screen debut.

The film focuses first on the innocence of the two elementary-aged students’ initial romance and begins from Su-rin’s point of view. After she moves to an island due to her stepfather’s job, Su-rin, who is being raised by her single dad, has difficulty fitting in to her new school.

Her gloomy life, though, begins to shine when schoolmate Seong-min befriends her. They begin to communicate with each other through special codes written in diaries and grow closer after discovering a deserted house, which they use as an after-school hangout spot.

The romance, however, is cut short when Seong-min and two friends break a legendary “goblin egg” that suspends the progress of time and space, and this is when the film starts to verge into the director’s fantastical question. Everyone and everything stops moving except for the three friends. It is only after more than 10 years that time for Seong-min, now a full grown-up, starts ticking again.

Despite the joy of breaking away from the shackles of frozen time, Seong-min is forced to confront townspeople who refuse to believe his story. The only exception is his first love Su-rin, who recognizes him from the diaries he wrote using their special codes and tries to help him fit back into the present.

“When you think about it, life would be very lonely if you were stuck in time without anybody else,” Um said. “I thought it would be novel try and show the growth of a boy in a world where everything stopped.”

For Gang, who had to play that man who never really had a chance to properly grow out of childhood, portraying Seong-min was no easy feat.

“I focused on how the audience might feel instead of myself because I believed it was more important for the audience to accept [the story] instead of the emotions I felt,” he said.

“Vanishing Time: A Boy Who Returned” runs for 129 minutes and is rated 12 and over.