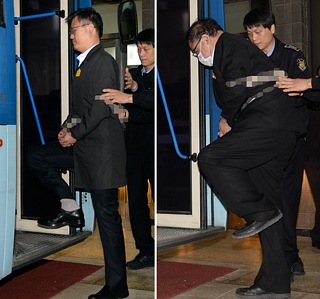 Jeong Ho-seong, left, the president’s former secretary, and An Chong-bum, an ex-senior Blue House secretary, enter a police bus to be taken to a detention center Sunday. [NEWSIS]

The Seoul Central District Court on Sunday issued pretrial detention warrants for two of President Park Geun-hye’s former aides, known to be among her closest, allowing prosecutors to keep them behind bars for 20 days to further grill them over allegations ranging from abuse of power to the leak of classified information.

The court early Sunday issued warrants to detain An Chong-bum, former senior Blue House secretary for policy coordination and Jeong Ho-seong, Park’s personal secretary of 18 years. With the warrants, prosecutors can keep them in jail for 20 days before indicting them.

The court granted the warrants because “the reasons and needs for detention were satisfied.”

An, a former economics professor at Sungkyunkwan University who was Park’s adviser on the economy, is accused of collaborating with Park’s friend Choi Soon-sil to strong-arm conglomerates to make donations worth 77.4 billion won ($67.7 million). The two foundations, Mi-R and K-Sports, collected the 77.4 billion won contribution just days after their launches and were thought to have been created by Choi as a slush fund for Park to use after she is scheduled to leave office in February 2018.

An is also accused of attempted coercion. The former professor is suspected to have threatened the owner of an advertising company to hand over the firm’s ownership to another company run by Cha Eun-taek, a director of TV commercials, nicknamed “crown prince” among culture moguls, because Park would show up at many of his events.

Cha is the de facto head of the Mi-R Foundation, which was established with the approval of the Ministry of Culture, Sports and Tourism in October 2015. It received 48.6 billion won from 19 conglomerates within two days of its launch.

An and Jeong were brought to the prosecutors’ office at 2 p.m. Sunday from Seoul Southern Detention Center for further questioning. An is said to have told prosecutors that the Mi-R and K-Sports foundations were created on the direct order of Park and that he had reported to her details of their management, including the donation.

Woo Byung-woo, the former presidential secretary for civil affairs who resigned Oct. 30 along with other officials including An and Jeong, was questioned by prosecutors Sunday over a slew of allegation, becoming the third former presidential aide to be probed after leaving the Blue House.

Among a number of accusations, Woo is accused of having embezzled money from a real estate company run by his family. He also is suspected to have abused his power to coerce the police to assign his son, who is serving his two-year mandatory military service at the police agency, to an easy job. He is also suspected to have falsely reported the total amount of his wealth by excluding a sloth of land in Hwaseong in Gyeonggi owned by his wife. The ownership of the Hwasong land is registered under a false name, sparking suspicion Woo evaded property taxes. Woo’s wife was questioned Oct. 30 by prosecutors for 14 hours.