Tens of thousands rally for Park to resign

Tens of thousands rally for Park to resign 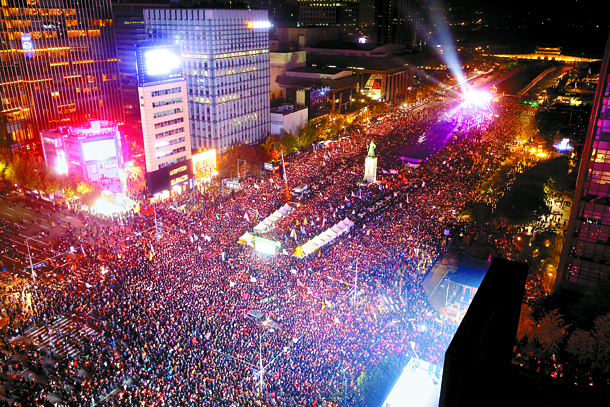 Nearly 200,000 people gathered in Gwanghwamun Square, according to the organizer’s estimates, while the police put the number at 45,000. The crowd held candles in their hands, demonstrating their outrage, which shows no sign of abating as allegation after another embroils the president as details of her relationship with her friend Choi Soon-sil have emerged over the past two months.

Saturday’s rally was substantially larger than the street protest at the same venue just a week ago, which drew an estimated 30,000 people. The increase is seen as a signal of the public’s anger toward the government, a threat to the survival of Park’s presidency. Rocked by the ongoing scandal over the influence exerted by Choi behind the scenes in state affairs and her acquisition of classified presidential material, Park’s approval rating nosedived to 5 percent in the latest poll, the lowest figure ever for any Korean president.

People in the streets varied in gender, age and background, from middle and high school students in school uniforms to couples with toddlers in strollers and even people in their 60s who said they voted for Park four years ago but now deeply regret their choice. Participants also included groups of families with young children.

“I came here tonight because I don’t want to be ashamed of myself to my baby when he asks me when he grows up later of what I did today,” said Ko Hye-mi, who was at the rally with her 6-month-old son in a stroller and her husband from Gwangju, Gyeonggi.

Ko said Park’s apology, aired live a day earlier, only deepened her disappointment. “Park’s remark, in which she said she wondered to herself whether she had become a president for this, really upset me for her irresponsibility,” said Ko, who joined others’ calls that she should immediately resign.

“She was elected president by the will of the people. So if the people’s will is that she must be out of office, she ought to follow that will as well,” said Ko.

Jung Min-joo, a university freshman, attended the rally with all of her family. She said she and her friends were upset that Ewha Womans University allegedly admitted Chung Yoo-ra, Choi’s daughter, despite not meeting qualifications, and that the university allegedly gave her better grades than she deserved.

“Many of my friends and I studied very hard to go to good universities and continue to study hard in college for job opportunities whereas Choi’s daughter was on an easy path just because of her family background. It disturbed me and my friends profoundly,” said the 20-year-old.

Her 48-year-old father, Jung Hye-hyun, said he wanted to teach his children that “they could change their future by participating in a rally like this,” reflecting on his own experiences in the 1980s. “When I was a university student, we fought against the authoritarian government on the streets to change our future and we did in the end. I wanted to pass that lesson to my children today that they too could achieve that.”

Jang Hye-seong, 31, who joined the rally from Namyangju, Gyeonggi, was also upset. “Watching middle school students in the rally chanting for Park to resign, I couldn’t help but cry because I was so sorry that they are living in a country like this. As an adult and a mother myself, I felt responsibility,” Jang said.

Calls for Park’s resignation began after civic groups held a funeral for Baek Nam-gi, a farmer and activist who died on Sept. 25 following a 317-day coma. Baek was hit by a water cannon at an antigovernment rally last year. His death was followed by wrangling between civic groups, bereaved families and the police, who demanded an autopsy of Baek’s body on the grounds that factors other than an injury inflicted by water cannon might have been attributed to his death, a demand rebuffed by the families.

Crowds in the candlelight protest stretched from Gwanghwamun Square near the American Embassy down to Seoul City Hall.

The rally lasted past midnight. The police dispatched 17,600 officers to manage the protest and handle the crowds should they try to reach the Blue House.

The rally’s organizer is an association of various civic, legal and labor groups and is planning another rally Saturday to call for Park to resign.