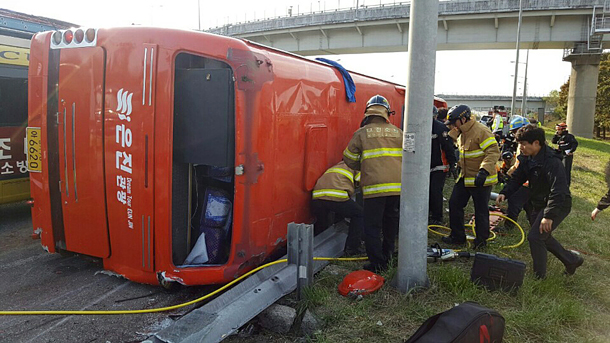 Emergency response workers inspect the scene of a bus crash at the Gyeongbu Expressway in Daejeon on Sunday, which killed four and injured 21 passengers. [NEWSIS]

A bus skidded to its side on Gyeongbu Expressway in Daejeon on Sunday morning, killing four and injuring 21 other passengers, marking the second bus accident on the same expressway within a month.

The bus was carrying 49 passengers including the driver from Suwon, Gyeonggi, to Mount Daedun on the border of South Chungcheong and North Jeolla for a hiking trip when a car swerved into the lane in front of the bus, according to the bus driver.

The driver of the bus, a 55-year-old surnamed Lee, said he tried to avoid a collision with the car and lost control of the bus. The bus hit a guard rail and street lamp on the side of the highway and skidded on its side.

The bus fell on its right side, where the door was located. “The bus driver broke the window at the front of the bus using a hammer placed inside the bus,” said Ahn Gi-chun, a passenger on the bus. “And passersby broke windows at the back of the bus from the outside so we could escape.”

But some reportedly flew out the window.

“Most passengers were wearing seatbelts, but a few who didn’t flew out the window,” said a 72-year-old passenger surnamed Choi.

Yet some wearing seatbelts were injured in the accident.

“When the bus skidded to its side,” said a 70-year-old passenger surnamed Lee, “some seats fell apart and people fell to the floor of the bus, and everything was just a complete chaos.

“Some people remained on the bus hanging by the seatbelts until they were rescued,” he added.

Among the 21 injured, eight were hospitalized in Daejeon as of Sunday and listed in critical condition, police said. Other passengers who were not seriously injured were taken back to Suwon on another bus.

“People were not drinking on the bus,” Lee said, “and the bus was not speeding, either.”

According to passengers, the bus was driving at about 90 kilometers per hour (some 60 miles per hour) at the time of the accident. The driver may face charges for driving beyond the 47-person passenger limit.

The accident, which took place near where the Gyeongbu expressway connects with the Honam Expressway, held up traffic in the area until about noon on Sunday, police said.

Officers are examining the bus’s black box and questioning witnesses to determine the cause of the accident.

Last month, a bus full of retired couples returning home from a trip abroad crashed into a concrete guard rail on Gyeongbu Expressway in Ulsan, killing 10 and injuring seven. Prosecutors charged the bus driver last month with speeding and causing deaths and injuries.