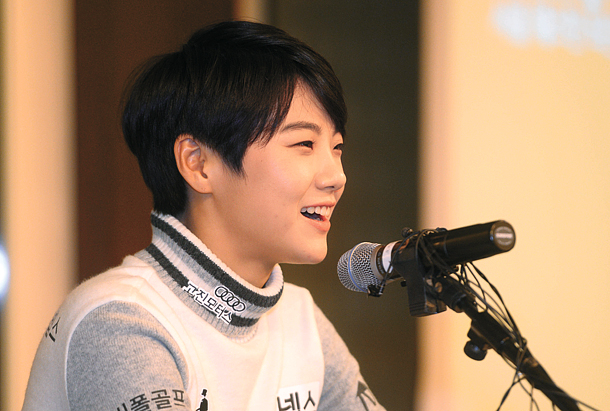 Korean golfer Park Sung-hyun smiles during a press conference in Seoul on Monday to announce her intention to join the U.S.-based LPGA next year. [NEWSIS]

After dominating the local KLPGA tour with seven titles just this year alone, Korean power hitter Park Sung-hyun announced Monday that she would join the U.S.-based LPGA tour next year.

Park, currently ranked ninth in the world according to the latest Rolex Rankings, has had her best season since her pro debut. She finished at the top of the KLPGA circuit in various categories including scoring average, driving distance and official money rankings.

In the middle of her busy Korea-circuit schedule, Park even managed to play abroad in various U.S.-based tour events under invitation, including the U.S. Women’s Open in July and Evian Championship in France in September, where she finished third and second respectively.

“It was a fruitful year for me,” Park said during a press conference in Seoul on Monday. “Going to the LPGA has been my dream since I was little, and I have decided now is time. 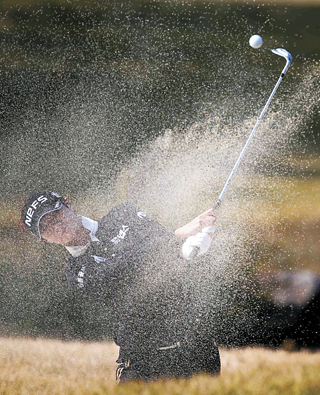 Park Sung-hyun hits a bunker shot during the final round of this year’s Fantom Classic on Sunday. It was her last tournament in the KLPGA this year before leaving Korea this weekend to join the U.S.-based LPGA. [KLPGA]

“I have mixed feelings, anxiety and excitement all at the same time about going to the United States next season, but I am going to take things one step at a time.”

Park gained membership to the LPGA after earning $682,000 this year from the U.S.-based events in which she participated under invitation. That puts her within the top 25 on the LPGA Money List.

According to LPGA regulations, a non-member who earns an amount of money “equal to or greater than the amount of official money won by the member who was in 40th place on the Money List at that time” may be given full LPGA membership even without a win from the tour or having to go through the LPGA qualifying school.

Park is the first Korean golfer to join the LPGA by exploiting this rule.

“I’ve been saying all year long that I was not entirely sure whether I should join the LPGA, but frankly, I leaned toward joining the tour,” Park said. “I asked players who are on the tour already, and all of them told me to come, which put me at ease.”

Park, who averaged 265.6 yards this year in driving distance, will join the power-hitting club that includes golfers Joanna Klatten of France and Lexi Thompson of the United States, who are ranked first and second in this year’s LPGA tour with average driving distances of 281.37 yards and 277.606 yards, respectively.

Park’s compatriot, Kim Sei-young, is listed fourth in the category with 271.977 yards on average.

In order to maximize her competitive edge in the LPGA, Park is taking time off to prepare for next year and focus on perfecting her plays.

“The LPGA season starts early next year, which is why I decided to end the year early even though the season in Korea is still ongoing,” Park said. “I was on the verge of crying on Sunday [the final day of the Fantom Classic, her last KLPGA event of the year].”

“I am going to make my debut in January at the Pure Silk Bahamas LPGA Classic,” Park said. “I will try to win the rookie of the year award, which I did not get in the KLPGA.”

The golfer cited her comfort with playing in the United States as the reason behind her success thus far. Still, she is without a title from the LPGA, and a trophy is part of Park’s ambitions.

She says she wants to compete against players like No.1 Lydia Ko of New Zealand and No.2 Ariya Jutanugarn of Thailand to win her first title on the U.S.-based tour.

Sema Sports, a Seoul-based agency, has already prepared a home for her in Orlando, Florida. “Park will leave Korea this weekend with her coach, caddy and English tutor, who will help her settle in the United States,” the agency said.

Park will join a pool of Korean players already competing on the American pro golf tour, considered the most talented bunch in the golf world.

Korea has 24 players ranked in the top 50 on the Rolex Rankings, and out of the 30 LPGA tour events played this year so far, Korean golfers have won nine titles, the most out of any country.