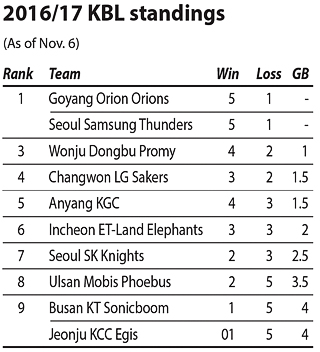 The Goyang Orion Orions, the defending Korean Basketball League champions from last year, have continued their streak so far this season, staying at the top of their game - and the league standings - with five wins and one loss.

In their latest match on Sunday against the Incheon ET-Land Elephants, Lee Seung-hyun, the team’s power forward and last year’s championship series MVP, drained the game winner at the last minute to rescue his team from overtime.

The Orions are looking more solid than ever this year, breaking low expectations that loomed at the outset of the season.

Before the 2016-17 season started on Oct. 22, many were skeptical about whether the Orions would have as much firepower as they did last year, when they broke a long slump to clinch the championship trophy for the first time in 14 years. Even though the team still has head coach Choo Il-seung and MVP Lee staying on this season, their key import from last season, Joe Jackson, departed the team after helping put the Orions at the top.

The final series last year against the Jeonju KCC Egis was essentially a stage for Jackson to show off his game. In the Orions’ six games against the Egis, Jackson tallied 23 points, seven assists and 3.8 rebounds on average. In the final game, he grabbed a double-double, putting up 26 points and 10 assists alone to lift his team over the regular season champs Egis.

But as it turns out, the Orions this year have just as much gusto, if not more. Lee is steady as ever and has helped keep the team in tip top shape with his stellar performance. Aaron Haynes, who is spending his second year with the Orions, has been averaging 27.50 points and leading the team in scoring.

Other than the two power forwards, O’Darien Bassett, the team’s new American guard, is filling the void left by Jackson, averaging 17 points so far in the league with 4.7 rebounds. “He’s got the speed and driving skill,” Orions guard Jung Jae-hong said.

The team’s next game, against the Changwon LG Sakers, is scheduled for Wednesday. 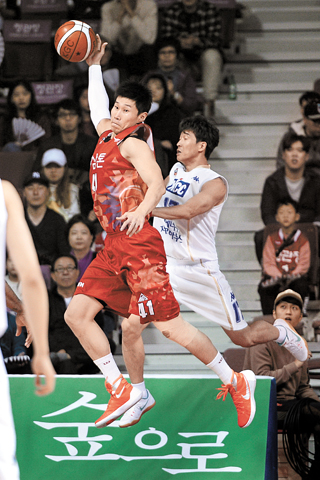 Posting a double-double in basketball is not entirely uncommon, but to tally three in just one week is quite a rare feat. For Oh Se-guen, Anyang KGC’s center, it’s just another day on the court.

Three days later, Oh went on to put 22 points on the board while grabbing nine rebounds against the Seoul Samsung Thunders. After a brief lull on Oct. 28 against the Incheon ET-Land Elephants, where he scored a meager four points, he started his double-double run on Oct. 30, nabbing 16 points and taking 10 balls off the rim against the Jeonju KCC Egis.

It didn’t take long for the center to post his second double-double of the season. That came against the Busan KT Sonicboom on Nov. 3, when he scored 14 points and grabbed 12 rebounds.

He then topped the feat three days later during a game against the Ulsan Mobis Phoebus, tallying 22 points and 13 rebounds on Nov. 6, though his effort was not enough to save his team from losing to the Phoebus.

Oh has been averaging 14.7 points and 8.6 rebounds in the seven games he’s played this season, with his field goal percentage standing at 55.1 percent. This is quite a change from the Oh that fans remember from the past couple of seasons.

Playing only in about 30 games each in the last two seasons, Oh found himself on the bench quite often due to persistent injuries, including pain on his knee.

But things are looking a little better this year. He’s spent the offseason mending all the injuries that have plagued him over the past years, allowing him to start the season without much pain to speak of on his body.

Even with Oh holding court, though, Anyang KGC is still currently ranked fifth in the league, with four wins and three losses. The team’s next game is slated for this Saturday against the defending champion Goyang Orion Orions.