China’s gift for the next president

China’s gift for the next president 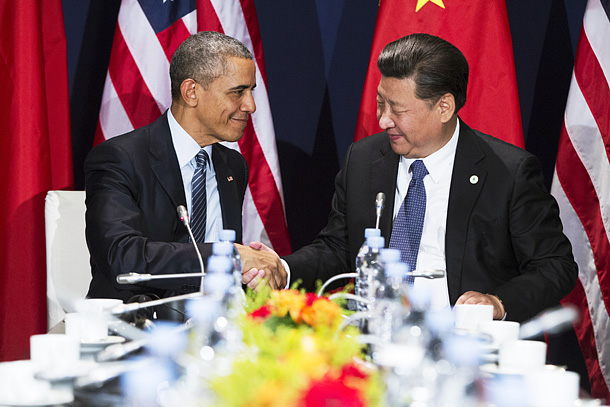 Back in 2008, incoming President Barack Obama inherited a U.S. financial crisis that was to some degree made in China. The next U.S. president may well confront a Chinese financial crunch with its origins in the U.S., as China unwinds the credit imbalances built up over the last eight years to defend against that global slump.

The causes of the 2008 crisis were many and varied. U.S. policymakers and regulators, as well as rule-bending behavior in real estate and banking, are largely to blame. But China’s mercantile trade strategy played a crucial role, too. Maintaining the yuan’s peg to the dollar — which kept its value artificially low in a deliberate effort to supercharge exports — created a giant Chinese trade surplus that had to be recycled into U.S. Treasuries. That in turn contributed to keeping U.S. rates too low for too long — fertile ground in which the seeds of the real estate crisis were planted.

The crisis, of course, plunged the U.S. into recession and pushed the global financial system to the brink of collapse. Since then, as policymakers in Beijing have loosened the currency’s unofficial peg and U.S. consumers chopped up their credit cards, China’s external imbalances have dissipated. The current account surplus has shrunk from a peak of more than 10 percent of GDP in 2007 to about 2.5 percent in 2016. The People’s Bank of China is spending down its foreign exchange reserves in an effort to fend off yuan depreciation pressures.

What hasn’t changed is the remarkably high savings rates that lie behind those imbalances. China continues to stash away some 47 percent of national income.

Now though, instead of relying on U.S. consumers to fill the gap, China is leaning more heavily on domestic investment. The share of net exports in GDP has fallen to 2.7 percent in 2014 from 8.7 percent in 2007. Meanwhile, the share of investment has risen to 47 percent from 41.5 percent over the same period.

Growth has held steady, but with bulging investment paid for with ever-increasing borrowing, outstanding credit has now swelled to around 250 percent of GDP. Voices from the Bank for International Settlements to the PBOC’s own advisers have sounded alarm bells. On its current trajectory, by the end of the next U.S. president’s term in early 2021, China’s credit-to-GDP ratio could be well above 300 percent.

To be clear, a credit crisis for China in the next four years isn’t inevitable. The country benefits from countervailing forces for stability — including that high domestic savings rate, which provides a continued flow of funding to banks. The government’s tight grip on both lenders and borrowers helps prevent disturbances escalating.

Even so, the next president will face a strikingly wide range of possible China scenarios. If reforms are successful and credit risks are contained, growth in 2021 might not be far off the current 6.7 percent level. If that doesn’t happen and credit imbalances unwind rapidly, pessimistic analysts see a drop to low single digits. Those different outcomes would have very different implications across Sino-U.S. relations.

If it did occur, a rapid unwinding of China’s domestic imbalances would risk a global shock. Smaller disruptions, along the lines of 2015’s stock market bust, will continue to send ripples across the Pacific.

In one sense, Obama had it easier than his successor. In 2007, China’s bulging current account surplus and burgeoning FX reserves were an easy target — strong evidence of currency manipulation. Successive U.S. Treasury secretaries kept delivering a simple message: Allow the yuan to float in order to level the playing field.

Now that China’s current account surplus has disappeared, however, and economic pressures are pushing the yuan downward, attention has shifted to the underlying cause of China’s imbalance — its outsize savings rate. Solving that problem will require difficult domestic reforms, from expanding social services so that Chinese don’t have to sock away money for illness and old age, to reforming the state-owned enterprises that continue to soak up an outsize share of income.

It was hard enough for the U.S. administration to make headway on the exchange rate, which at least was clearly a bilateral issue.

Gaining diplomatic traction on policies that have international implications but fall squarely within the category of China’s internal affairs could be impossible.


*The author is the chief Asia economist for Bloomberg Intelligence and author of “Understanding China’s Economic Indicators,” a guide to Chinese economic data.