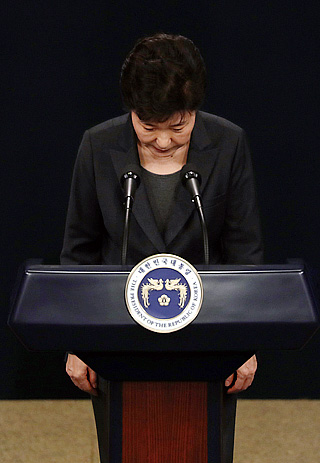 The people of Korea have turned their backs on the president. President Park Geun-hye’s approval rating is at a pitiful 5 percent. Her second public statement pleading for forgiveness only made matters worse. She insisted that she was not a cult worshiper. But nothing she does or says is believable anymore.

The people now even suspect she ran for president for greedy or even spooky reasons. Even after she has become an object of condemnation, ridicule and abhorrence, she cannot divorce herself from her position of power. But she is looking at a crumbling administration. She has even lost her authority with the police. Not one of the riot police dared to provoke the protesters at candlelight vigils.

The people from young students to the elderly are shaking with rage and bowing with shame. None of the people the president befriended seem to be normal. They secretly taped one another on phones and CCTV cameras. The power given to our elected officials and their aides was abused by a shameless collection of people. The president, who vehemently denied any leak of classified documents by her aides — claiming that such action is tantamount to a crime against the nation — willingly shared top-secret information with Choi Soon-sil.

A president who repeatedly talked of loyalty and faith has utterly deceived the people.

The president can never restore state authority on her own. The people who elected the president on her promise of building a country of hope and happiness are demanding she step down. The government has made one major misstep after another. It did nothing right with North Korea. Park’s early, terrible appointments were hardly noticed thanks to the controversy over the execution of Jan Song-taek, the uncle of leader Kim Jong-un in North Korea, and treasonous behavior by one of South Korea’s left-leaning parties.

The government’s incompetence cost hundreds of young lives in the sinking of the Sewol ferry in April 2014 and the unprecedented outbreak of Middle East respiratory syndrome in May 2015. The president’s arrogance somehow went unnoticed in this series of major disasters. She pushed out outspoken ruling party floor leader Yoo Seong-min in July last year and nationalized the publication of school history textbooks in September to paint the conservative legacy in a more favorable light. Last April, she helped bring about a humiliating defeat for the ruling party in a general election by letting her loyalists dominate the nominations.

Park’s political life now hinges on the opposition camp’s mercy. The Minjoo Party of Korea demands the president surrender her power over state administration to the legislature. It has indicated that would save her from being entirely stripped of the presidency. The opposition party may not want to risk any political backlash for Moon Jae-in, former party head who now tops polls for the next presidential election.

Former People’s Party head Ahn Cheol-soo, another likely candidate to run for president, calls for Park’s immediate resignation. He may not want to give any time for potential candidates from the conservative camp to recoup public confidence. Other liberal and opposition candidates, including Seoul Mayor Park Won-soon and Seongnam City Mayor Lee Jae-myung, have joined rallies against the president. The remaining crew in the ruling party loyal to the disgraced president is trying not to tumble off the sinking ship.

Park has brought about disaster for the nation because of her outdated and narrow-minded values and lifestyle. She referred to a clandestine inner circle for state management and filling jobs instead of her own cabinet or the presidential office. Regardless of her denial of cult practices, image often matters more than facts in politics. No one believes her promise of normalizing governance through the cabinet and presidential office.

The public has become so doubtful about her that some even think Choi — now behind bars — could go on influencing the president through mysterious magic powers. The state management is a wreck. She has only a few days until another major rally.

There exist two elected powers in a democracy — the president and legislature. If the authority over state management is lost by the president, it should be given to the parliament. The lawmakers in the opposition camp fortunately have the experience of running the country. People’s Party head Park Jie-won has advised that if the president lets go of power, the people could back down slightly. He also warned the opposition not to push things too far. The president is not the only person who is worried about this nation. She must show faith in the people and legislature. If she loves this nation, she must give herself up.