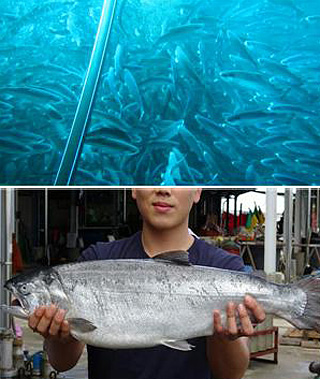 Top: A fish farm where young salmon is cultivated. Bottom: A fully-grown salmon, which weighs approximately 10 pounds. The government announced Monday that it would be sending 500 tons of salmon raised in open ocean fish farms in Goseong County, Gangwon, to produce distributors today. The Ministry of Oceans and Fisheries said it was the first successful cultivation of salmon on a fish farm in Asia. The facility is part of the government’s future growth strategy for the industry, which includes fish farms for northern bluefin tuna and eels. After flatfish, salmon is the second most consumed fish in Korea, consumption having tripled in the last five years from 1.2 tons in 2010 to 3.4 tons last year. [MINISTRY OF OCEANS AND FISHERIES]