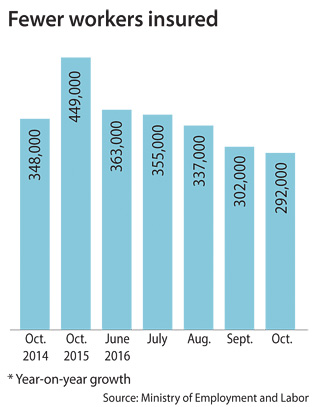 Ongoing corporate restructuring is taking its toll on the local labor market, the government said on Monday.

The number of employees with insurance grew by 2.4 percent year on year by 292,000 to 12.65 million last year, the Ministry of Employment and Labor said Monday. The 2.4 percent growth rate was the lowest in six years when it rose 272,000, indicating fewer people are finding salaried positions.

“More people have insurance through their workplace but the growth rate fell to the lowest in six years,” said Yang Hyun-soo, a director at the Labor Ministry. “Fewer people are finding jobs in the manufacturing sector due to poor exports and the ongoing corporate restructuring.”

Data showed the number of people who found jobs and applied for insurance provided by their companies in the manufacturing sector rose by only 3,572, the lowest rise since 2009 when the figure rose by 6,000.

By sector, those who found new jobs in the manufacturing sector producing transport equipment, including workers in shipbuilding and railways, dropped 12.2 percent year on year, or 253,000, in October, the seventh consecutive monthly decline.

The government said there are more people finding jobs and getting insured in agricultural and cosmetics.

The number of men with insurance provided by their employer rose 1.7 percent and among women grew 3.3 percent compared to a year ago.

“More companies are looking for those with experience, while job seekers have higher standards in working conditions and payment,” said Park Se-jung, a director at the Labor Ministry.

“It does appear that ongoing corporate restructuring might have negative impacts on the labor market but we think it is that young Koreans are wanting better jobs compared to the past.”

The government has taken measures to protect the sites where the troubled industries including shipbuilding are clustered by designating the region as a special watch site.