The loneliest place on earth

The loneliest place on earth 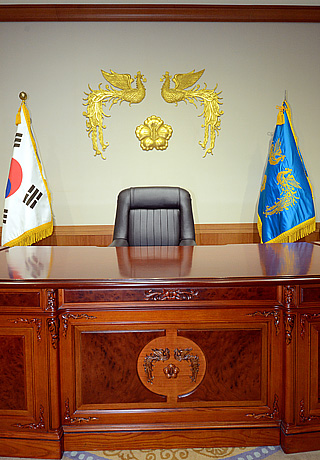 Not so long ago, I visited the former home of Park Chung Hee in Sindang-dong, central Seoul. The Jung District Office was going to invest 23 billion won ($20 million) to turn the site into a history and culture park, but there was no progress on construction. According to the district office, the park will be competed in late 2018.

The Sindang-dong residence was where Park lived from May 1958 to August 1961, when he was commander of the army’s seventh division. The single-story wooden house has been restored to how it looked when Park lived there. The small room next to the master bedroom displays photographs of a young Park Geun-hye and little sister Park Geun-ryeong playing the piano, as well as little brother Park Ji-man dressed as a cowboy.

Park Geun-hye must have had a happy childhood in this house. Back then, she must have never imagined that someday, she would become president of the country and then make an apology to the nation. “I had no one helping me with personal affairs as I lived alone and sought help from Choi Soon-sil, with whom I have had a long connection,” she said. “I lived a lonely life by cutting ties with my family.”

The presidency is a lonely job. Korean President Kim Young-sam once compared the Blue House to a prison. William Howard Taft, the 27th president of the United States, called the White House “the loneliest place in the world.” American political scientist Robert Gilbert wrote in his book “The Mortal Presidency: Illness and Anguish in the White House” that the presidency is hazardous to one’s health.

In the lonely post, the leader often finds solace from a partner with whom he or she can confide. British Prime Minister Margaret Thatcher had her husband Denis Thatcher. The current British prime minister, Theresa May, has called her husband Philip May the “rock” that supports her. Julia Gillard, the first female Australian prime minister, had her partner Tim Mathieson, who attended various official events with her. At the Asia-Pacific Economic Cooperation summit in November 2011, he was the only male at the spouses’ gathering.

Those who voted for President Park in 2012 must have expected her to endure a lonesome position and work for the development of the nation. But she betrayed their expectations. Protests calling for her resignation are spreading all across the country.

Park should have gotten over her loneliness. While it is her fault that she gave in to her feelings, her aides must take responsibility for letting the president rely on her longtime friend.