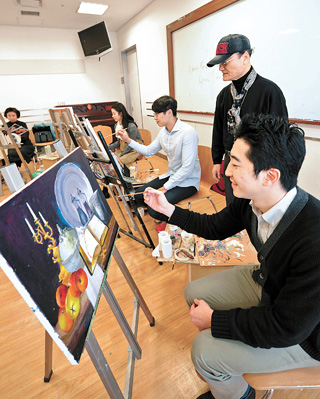 Office worker Kim Jae-hoon, 41, has more time on his hands after work these days. Last week, he visited a department store near his office to sign up for a guitar class at its culture center. “For the spring semester, my wife and I are thinking of taking cooking classes for married couples,” Kim said.

An anticorruption act that went into effect Sept. 28 prohibited a range of professions from the expensive entertainment that was a fixed part of many people’s jobs.

As a result, a slew of workers like Kim are suddenly freed from drinking and dining after work.

While some are relaxing at home with family, others are looking for ways to use that spare time for self-enrichment, such as finding a new hobby, exercising or learning new languages.

Culture centers at department stores are the first stop for office workers looking for new hobbies. They offer beginner classes in various subjects such as floral arrangement, oil painting, musical instruments and dancing. Most business districts have at least one department store nearby.

The culture centers normally cater to housewives, the main customer base for department stores. By providing classes and activities, they hoped the housewives would do some shopping as well. The most popular classes were held in the mornings or early afternoons.

Since the so-called Kim Young-ran Act went into effect, demand for evening sessions has been rising with a steady inflow of office workers.

“In branches near business districts - Gangnam and Yeongdeungpo Districts and Myeong-dong - applications for the 7 p.m. classes closed particularly early this quarter,” said a Shinsegae spokesman. “Classes for 8 p.m. and 9 p.m. didn’t have many students before, but they are attracting more and more this year.”

Lotte Department Store’s culture center saw a boost in the popularity of night classes since the fall quarter. The 6:30 p.m. slot, which ranked third for both spring and summer quarters, rose to second most popular in the fall.

Lotte shifted its lecture series by writers, critics an entrepreneurs to the evening during the weekdays. The lectures used to be held during the day.

Fitness clubs are also cashing in after the Kim Young-ran Act came into effect. “The first thing I did for myself after seeing a decline in dinner appointments was to register at a yoga class near my house,” said a 25-year-old office worker surnamed Kim.

A gym in Seocho-gu saw a 10 percent increase in office worker subscribers in October.

“Although the spike isn’t huge, any increase in October is unusual,” said a worker at the gym. “Fitness club subscriptions generally show a decline around this time of year as the weather starts to get colder.”

After seeing a recent rise in students, the Chinese language institute Yiersan Academy launched a promotion for office workers in November. Students with a “Tomorrow Learning Card”-which gives discounts on vocational academies for office workers and job seekers - can have 45 percent of their fees returned if they attend over 80 percent of the sessions.

“We don’t have the exact numbers for October, but we did receive more phone calls and subscriptions from office workers since late September,” said a clerk working at the institute’s Jongno branch.

Lee Seung-sin, a professor at the Consumer Information Science Department at Konkuk University, said that the trend of office workers seeking self-development after work will continue.

“Today’s office workers are living in an era of uncertainty: they live longer and they change jobs or career paths more than the older generations did - in other words, they know their current job won’t last forever,” she said. “This motivates them to learn new thing or develop hobbies that they might pursue as a career.”