Cruise gets extreme in ‘Jack Reacher’ : The Hollywood star returns with follow-up to 2013 action-thriller

Cruise gets extreme in ‘Jack Reacher’ : The Hollywood star returns with follow-up to 2013 action-thriller 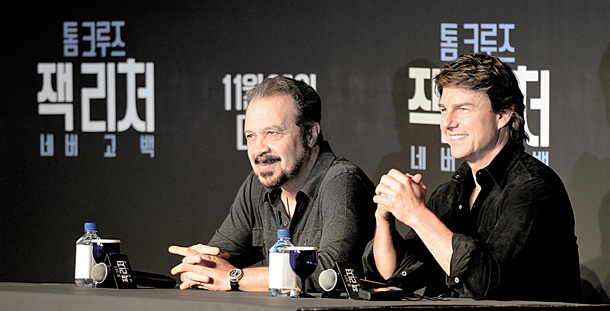 Tom Cruise made his eighth visit to Seoul on Monday to promote his new action sequel “Jack Reacher: Never Go Back.” Along with the film’s director Edward Zwick, who previously worked with the actor on “The Last Samurai” a decade ago, the two attended a press conference held on Monday afternoon at the Ritz-Carlton Seoul.

Based on one of Lee Child’s 20 “Reacher” best-sellers, the new adaptation follows the first “Jack Reacher,” which came out in 2013. The action-thriller revolves around former army major Jack Reacher (Cruise), who tries to save the woman who now has his old job, Susan Turner (Cobie Smulders), from military guys that have gone rogue.

Despite harsh reviews from entertainment media outlets such as Variety and others for having banal acting, locations and plot, it remains to be seen whether Cruise, who is one of the most beloved Hollywood stars in Korea, can convince local fans to look past the cliches.

The following are edited excerpts from Cruise and Zwick’s press conference with Korean journalists.

Q. How do you feel about visiting Korea?

A. Cruise: I was welcomed by [fans] at the airport in the morning and I would really like to express my gratitude. I’ve had a long flight and I appreciate all the welcome. Thank you.

Zwick: My first visit has been great. I’m trying to work with film community here. I’ve seen so many great Korean films and I have also liked Korean directors. I would like to make a film that is appropriate here.

Can you explain Jack Reacher? Do you have any similarities with the character?

Cruise: Reacher travels around a lot, which matches my real life. But I think I travel in a cooler way [as Reacher hitchhikes every time]. This character possesses lots of skills, and is a unique character that lives based on his instinct. The film is suspenseful and I like being part of that kind of movie.

For the first time, I attempted making a punch while breaking a window, which wasn’t easy. Also, the hand-to-hand combat scene was physically demanding. I had to undergo training and constant practice.

You are well-known for doing your own action scenes. Why do you put so much effort into these scenes?

Cruise: Whenever I shoot, I imagine every scene that the audience will be watching. Providing the audience with a good film: that is my only goal. I’m not a kind of an actor that sits and waits. I always arrive at the shooting scene early and leave the latest. This is because I love the movies that I take part in.

You already have an action hit “Mission Impossible.” What made you jump into another action sequel?

Cruise: I just love movies. Reacher is obviously very different from [Ethan Hunt from] “Mission.” The car chase, hand-to-hand combat and relationships among characters are very different. There is a different suspense in “Reacher.” Reacher swinging a punch in a bathroom [inside a flying airplane] is shocking. The character is extreme, and that’s what’s fun about him.

What did you consider the most when directing this action-thriller?

Zwick: I’ve never worked on this kind of film before. I’ve always loved crime thrillers as a kid, but never tried it out myself [as a filmmaker]. Christopher McQuarrie, [the director of the first “Reacher”] was a generous man, who wanted to know how we [the new team for the second feature] would think of the movie. That gave me lots of freedom, which led me to wonder what would happen if we take this man to different kind of circumstances.

What do you think makes Cruise the big star that he is?

Zwick: The fact that he is a great actor is well-known. The audience believes that the movie is going to succeed on his own terms. The understanding that Tom has of the movie, the commitment towards the certain amount of training all account for his popularity.