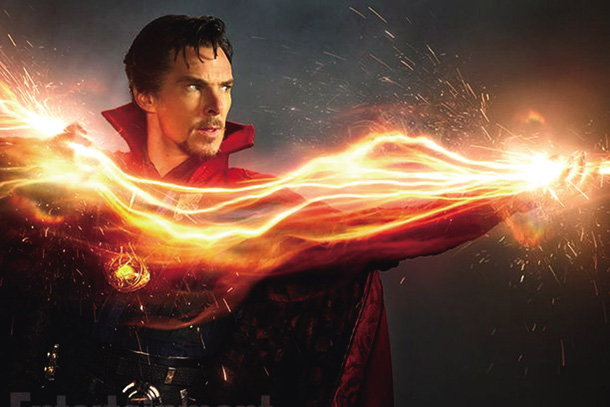 Marvel Studio’s latest action-fantasy “Doctor Strange” maintained the top spot at the local box office for its second weekend, according to the Korean Film Council on Monday. The Disney-distributed superhero film sold 368,070 tickets from Friday to Sunday at 1,191 screens, and raked in 3.4 billion won ($2.98 million). Since its release on Oct. 26, it has notched an impressive 3.9 million total tickets sold.

Directed by Scott Derrickson and starring Benedict Cumberbatch as a skilled yet cocky surgeon, the film unfolds after the surgeon gets into a car accident that permanently leaves him with unsteady hands. Feeling devastated, he heads to Kathmandu’s ancient temples in search of spiritual enlightenment. There he finds his spiritual mentor, the Ancient One (Tilda Swinton), and realizes his special powers that allow him to fight off villains that try to break the laws of nature.

Director Lee Gye-byeok’s “Luck-Key,” starring actors Yu Hae-jin and Lee Joon, hit the second spot even in its fourth weekend. The Showbox-distributed action-comedy sold 170,000 tickets over the weekend and earned 1.4 billion won. Its total ticket sales hit the six million mark as of Friday, 23 days after its Oct. 13 release. The action-comedy has reached the six million mark earlier than other hits, including “Inside Men” (2015) and “The Wailing” (2016).

The documentary “Moo-hyun, the Story of Two Cities,” which depicts the life of the late President Roh Moo-hyun, rounded out the top five, having sold 14,000 tickets.

Thai romance movie “The Teacher’s Diary” and the Disney animation “The Little Mermaid: Attack of the Pirates” each came in seventh and eighth.

The re-release of the 2004’s “The Notebook” followed, which was followed by “Inferno” which came in at tenth.