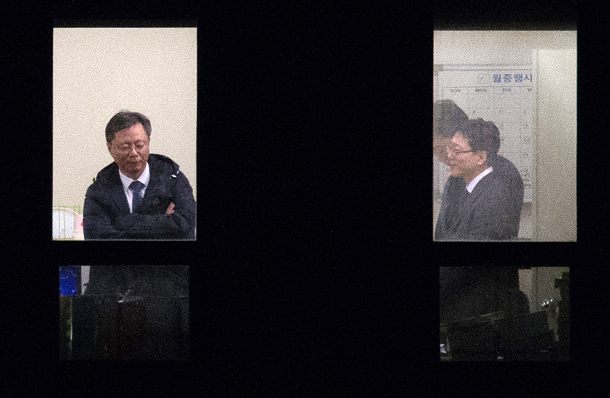 Woo Byung-woo, far left, former presidential senior secretary for civil affairs, is seen with folded arms while two prosecutors stand across from him looking deferential in a photo taken during Woo’s questioning on Sunday. [CHOSUN ILBO]

Prosecutors were criticized Monday for alleged special treatment of former senior presidential secretary Woo Byung-woo during a questioning a day before, after a photo showed investigators standing deferentially before Woo.

In a photo published by the Chosun Ilbo Monday, Woo is seen with smugly folded arms while two prosecutors stood across from him looking deferential. The photo sparked an immediate internet meme: “Questioning for the King.”

The photo deepened public suspicions that the prosecutors would go easy on Woo, a former prosecutor himself with years of service in the elite organization.

A prosecutor involved in Woo’s case said the photo was taken when there was a recess in Woo’s questioning.

Woo answered prosecutors’ summons for questioning Sunday after repeated refusals to come to the prosecutors’ office. Woo, former senior presidential secretary for civil affairs, is accused of having embezzled money from a real estate company run by his family.

He is also suspected to have abused his power to get his son an easy job with the police for his two-year mandatory military service. He is additionally suspected of having underreported his wealth by excluding a plot of land owned by his wife in Hwaseong, Gyeonggi. The Hwaseong plot is registered under a false name, sparking suspicion that Woo evaded property taxes. Woo’s wife was questioned Oct. 30 by prosecutors for 14 hours.

He is also alleged to have pressured Nexon, a game company, to buy a property in Gangnam District owned by his mother-in-law for 132.6 billion won ($115.9 million) in 2011, when he worked at the Supreme Prosecutors’ Office.

Woo resigned from his Blue House job on Oct. 30 along with other presidential aides as President Park Geun-hye attempted to appease growing public outrage at a scandal over the influence exerted by her longtime friend Choi Soon-sil.

How thoroughly prosecutors question Woo is seen as a barometer of their objectivity and integrity. The publication of the photo only added to a sense of public distrust in the elite body.

A prosecutor involved in the investigation into the so-called Choi-gate scandal said they are looking into whether Woo neglected his duty at the Blue House by letting Choi meddle in state affairs. The prosecution’s decision to consider a dereliction of duty charge against Woo is a departure from its previous position that their investigation into Woo was not related to the Choi scandal.

Woo’s job at the Blue House as senior secretary for civil affairs was to monitor presidential officials for signs of legal violations or behavior that could breach the office’s integrity.