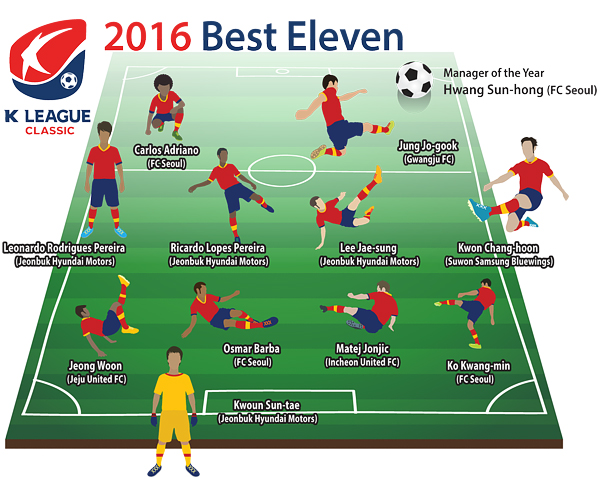 Jung Jo-gook of Gwangju FC captured his first Most Valuable Player (MVP) award Tuesday from this year’s K-League Classic while Hwang Sun-hong, the skipper of FC Seoul, received his second manager of the year award.

Jung, a veteran striker who led the league in scoring with 20 goals, enjoyed the second wind of his career this season and eventually collected 46 votes out of 109 to be selected as the MVP, beating Seoul’s Osmar Barba and Jeonbuk Hyundai Motors’s Leonardo Rodrigues Pereira in the process. Jung was also included in the Best-11 of the Classic as one of the best two forwards along with Carlos Adriano of Seoul.

His MVP honor is the first one to be given to a player from a team that did not finish as champions or runners-up in the top-flight league.

Upon debuting in 2003, Jung quickly garnered stardom as the future of Korean football. Despite the hype, his career was a rather bumpy ride. 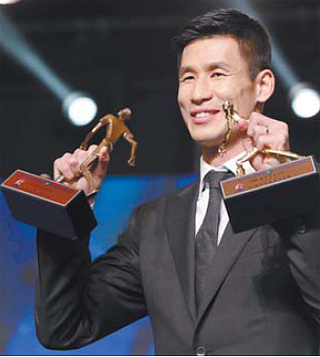 Jung Jo-gook of Gwangju FC poses with his trophies during the K-League award ceremony in Seoul on Tuesday. Jung won the K-League Classic’s MVP award from this year. [ILGAN SPORTS]

Starting his career with Anyang LG Cheetahs, the predecessors of Seoul, Jung suffered a broken cheekbone both in 2008 and 2009, which were perhaps the start of unfortunate events that mired his career. He showed a sign of recovery in 2010 when he scored 13 goals, which led to his brief stint overseas in 2011, although he returned home the next year after failing to settle in Europe.

After being discharged from the military, he rejoined Seoul but the Jung that fans remembered was nowhere to be found, ending the 2015 season after scoring just one goal.

Jung’s biggest supporter during his slump was his son, Jung Tae-ha. Tae-ha, who is six years old, asked once in the past why Jung is not playing in games.

Jung said, “This ripped my heart out and forced me to put aside everything else. I just wanted to become a father that my son can be proud of.”

Then came Jung’s biggest decision of his career yet, moving from his beloved Seoul to Gwangju FC, despite the decline in annual salary and having to live apart from his family.

“My family struggled at first but they supported me nonetheless,” recollected Jung.

Owing to his family’s unconditional support, Jung began the season on a high note, netting two goals on Mar. 12 during their season opener. “Jung plays with his heart and desperation,” said Nam Ki-il, Jung’s skipper. “That inspired the entire team.”

Other than Jung, Hwang, who took up Seoul’s helm in the middle of the season, earned his second manager of the year award after leading his team to take the championship title. “I am not sure if I deserve this honor,” said Hwang. “Half the credit goes to Choi Yong-soo [Hwang’s predecessor].”