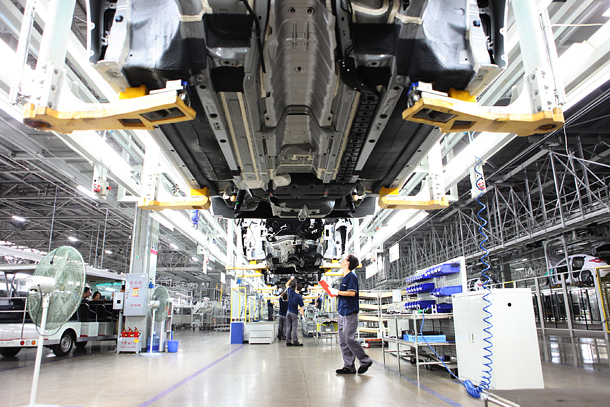 Liberalization and globalization are crucial to becoming a strong and advanced nation. A country can build international competitiveness to keep up with global trends through internal reform. It can lose resilience if it becomes complacent and resists change by clinging to regressive and passive paradigms.

What remains stubbornly closed in a 30-year-old outworn paradigm is the labor-management relationship.

Korea’s labor unions are a political byproduct of the democracy movement against military regime in 1987. Its influence over the labor-management relationship is unprecedentedly powerful. It is at the same time the most outdated system in Korea, undermining economic capabilities and industrial competitiveness. In the global competitiveness report of the World Economic Forum, Korea ranks 77th in labor market efficiency and 135th in labor-management cooperation.

The auto industry is a key assembly sector where productivity is defined by the number and working methods of the force on the factory lines. Stability in labor-management relationship and flexibility in workplace, therefore, is important in the auto sector that takes three to four years to come up with a new model and to respond quickly to market needs.

The key carmakers of the United States, Germany, Japan, France, Italy and Spain have developed a cooperative and mutually beneficial employer-employee relationship to stay competitive in the fierce global market over the last three decades. But the Korean union maintained a hostile, contentious and selfish position in its relationship with the management. It has fought to gain an annual rise of 3 percent to 5 percent in wages every year through strikes and has the most generous welfare benefits. Yet, it vehemently resists any flexibility and changes in the wage system that can weaken its vested interests. Korean automobile factories now have become most costly to sustain with low productivity.

Foreign competition is strengthening with management guaranteeing jobs while the union yields in wages to keep up output and quality. Output from Korean factories has become smaller. Local carmakers are choosing to go overseas to roll out models and expand production, reducing jobs here and hurting local economies. Because rising salaries of workers on the finished car production lines, the gap with their counterparts in parts assembly lines on the second and third supply line is widening to translate into weakening profitability of the parts sector and shift of workforce to other fields.

Korea was the only industrial site that carried out a lengthy labor union strike this year when the global auto market struggled on depressed demand. It is also the only country where walkouts are justified and a replacement workforce during strikes is illegal.

Few other countries impose strict restrictions on agency and contract workers. Korea will not be competitive as long as the labor-management relationship does not shake out of its aged 30-year-old model.

Both labor and management must seek out a cooperative relationship that can ensure both competitiveness and jobs. Instead of fighting for selfish interests, the union must adapt to the changes and help make jobs for the young and regional economies stronger. The revival of Korean Inc. hinges on the union’s change. Otherwise Korea’s automobile sector will end up like Australia where carmakers all packed up due to strong unions and the local shipbuilding site weeping for the lost glory days.


*The author is the president of the Korea Automobile Manufacturers Association.