Performance during this year’s fall sale better than 2015

Performance during this year’s fall sale better than 2015 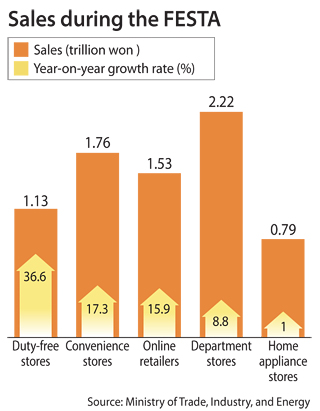 “Last year’s grand sale event raised domestic consumption growth by 0.2 percentage points and GDP growth by 0.1 percentage point,” said Chung Jong-young, a director at the ministry. “We believe there were more retailers that participated in this year’s sale, and a higher number of foreign tourists spent more during the event compared to last year.”

Retailers and companies that participated in the event made 8.7 trillion won ($7.64 billion) in sales, a 12.5 percent increase from last year’s sale.

The number of transactions made through credit and debit cards rose 4.8 percent from last year, and it helped raise domestic consumption in general, the ministry said. The number of card transactions has been continually increasing since 2012, as more people are solely using cards to pay at stores.

About 1.7 million tourists visited the country during the sale, which is 7.3 percent, or 116,000, more than last year. Data from the Ministry of Culture, Sports and Tourism showed the country made 2.2 trillion won from tourist revenue just during the fall sale alone.

The government has cited the higher number of retailers that participated in this year’s event as one of the biggest reasons for the sale having a larger economic effect.

Only 92 retailers participated in last year’s event. The number jumped to 341 this year.

During the sale, fashion products were the most popular. About 78 percent of consumers during the sale said they were interested in fashion-related goods, followed by digital and electronics products at 50.8 percent and household goods at 47.3 percent.

Three big e-commerce retailers, including Coupang and Ticket Monster, joined this year’s sale for the first time and helped raise sales among online retailers by 15.9 percent, from 1.32 trillion won to 1.53 trillion won.

“We will try to have more traditional markets to participate in next year’s event as well as franchise stores,” said an official at the Trade Ministry.