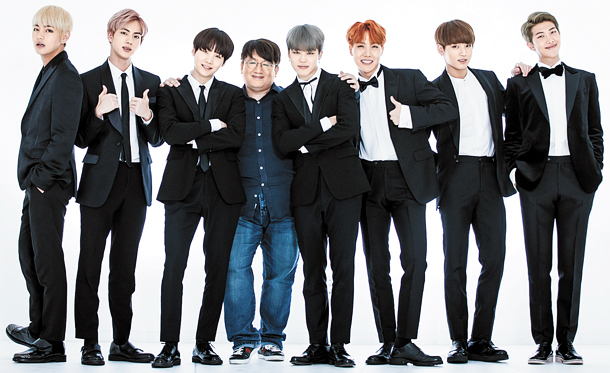 The members of the boy band BTS enjoyed a thunderous reception to their latest album “Wings” when it was released last month. The K-pop act not only conquered Korean music charts, but it also made its mark on the Billboard as well. By the time the dust had cleared, the boys had set a record as the highest-charting Korean artists in the history of the Billboard 200 album chart. The previous record was held by the girl group 2NE1. A writer for Billboard’s website said that it was an amazing feat for the group especially considering the fact that they never promoted their album in the States, nor had they released any songs in English.

Bang Si-hyuk, CEO of the group’s music label Big Hit Entertainment and the record producer responsible for the creation of the boy band, is opening a new door for opportunities in K-pop. Also known as “Hitman” Bang, the man and his group sat down for an interview with JoongAng Ilbo at the boy band’s training space to discuss this global phenomenon.

The room was full of suitcases, indicating the travelling lives of the members. Ever since their debut four years ago, they have been to all corners of the world meeting with some of the most influential stars in existence. On one corner of the room was a large massage chair gifted to the members by Naver for their achievement in being able to garner 3.36 million followers on the V app platform.

The members of BTS; Rap Monster (22), Suga (23), Jin (24), J-Hope (22), Jimin (21), V (21), and Jungkook (19), have been uploading short behind-the-scenes footage to their YouTube channel “Bangtan Bomb” ever since their debut. The settings for their videos are varied - from the dorms, the dressing room, and even their offices, the boys have shown their laughs and tears for their fans to see.

Bang said he wanted to make an idol group that people could truly feel that they could lean on, kind of like heroes, rather than fake manufactured singers.

“Rather than hide our true feelings or try to overact, we embraced our emotions and let ourselves be shown on YouTube and social media,” said band member Suga. “Our agency never forced us to do it. This was our own decision.”

The seven band members have been living together for seven years, since their days as trainees, and their fans from around the world have been watching their progress all along.

“We are a group that has benefitted the most from social media,” said Rap Monster. “Even our fans from Brazil are able to watch us in real-time and in high quality. It’s an environment that doesn’t limit us to Korea.” The group took the concept of promoting on YouTube a step further. 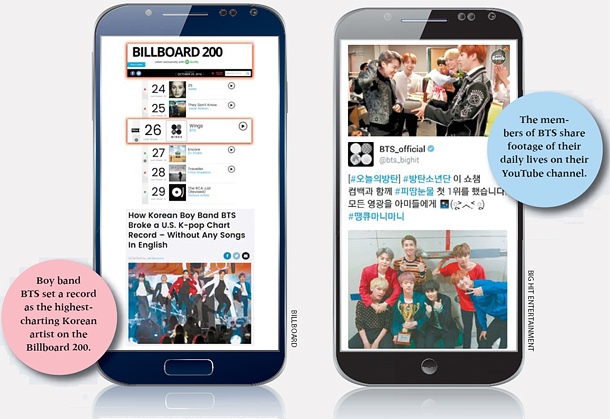 The group did not find success immediately after their debut. There were mixed reactions to their band name (which literally translates to Bulletproof Boy Scouts), and their success was in no doubt due to not being part of a major label (such as SM, YG, or JYP).

“We once went to see the concert of a veteran singer whom we were close to,” said Rap Monster. “When we walked out of the performance at the Gymnastics Stadium in Jamsil, we knew nothing would make us happier than being able to be up there on that same stage. It actually became a reality in May of this year. Our wish was granted.”

Even since the beginning stages of their debut, band members Suga, Rap Monster, and J-Hope have actively participated in the songwriting process. For their latest album, all seven members lent a hand. The members said that they each inspire each other to write.

“Since the others were all producing our entire album, I naturally learned how to do it by observing them,” said Jungkook, who is the youngest member in the group. “They helped me to understand the joys of songwriting and producing.”

The boy band has been utilizing a “storytelling” method to help with the concepts of their albums. From the “School Trilogy” to the “Youth Trilogy,” they have released a variety of albums in series, most of which are based on the idea of youth. They not only concentrate on the beauty and positivity of youth, but their songs also discuss bullying, the stress of entrance exams, and issues with parents as well.

“We tried to relate with listeners who are of our age group, and brought up topics that we could think about together,” said band member Suga. “The pain and uncertainty associated with being young, and the wrong ideas that can form during that age were issues we wanted to put in our songs.”

Their messages reverberated not just in Korea, but all across the world. In a column in Billboard analyzing the boy band’s success, they attributed it to the individual member’s artistic individuality, a signature sound well-suited to the K-pop style, and impressive teamwork. The column also mentioned the group’s mission, and how regardless of the language barriers, its members tried their best not to alienate their international fans.

The boy band attempted to tackle a different idea associated with youth with their latest single “Blood Sweat & Tears”, which is temptation and conflict. The band members mentioned that the idea for the song was inspired by “Demian,” a classic novel by author Hermann Hesse. When asked what their personal temptations were, the seven band members shouted a similar response.

“We wonder whether we should sleep more or do another activity,” they said. “Would it be better to sleep one hour less to clean our room?” 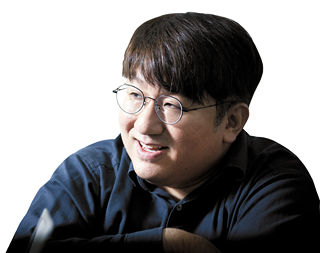 
Independence is key to K-pop success


CEO Bang Si-hyuk of music agency Big Hit Entertainment currently has no time to rest amid the successful release of his idol group BTS’ most recent album, “Wings.” It even went beyond the initial expectations of the company. While Bang is a self-proclaimed “king of internet surfing,” he couldn’t recognize what the reasons were for the boy band finding success with western audiences.

“I thought of how great it would be if they could enter the top 100 of the Billboard 200 album chart, since their previous album ‘The Most Beautiful Moment in Life, Pt. 2’ made it up to 171,” said Bang. “We were shocked when the first week results came in. We recognized the explosive response from western fans, and realized that there is still further room for growth for the boy band.”

K-pop has undergone criticisms recently for its supposed inability to expand past the domestic market. While there have been exceptions with acts such as Psy and BigBang, this has been the case for a majority of acts. However, Bang “humbly” offered his opinion, saying that BTS has showed the potential for K-pop music to grow further than the Korean market and reach North America and Europe.

Q. The popularity of BTS seems to be greater overseas than in Korea.

A. People started to realize their international popularity, which helped the group to become more recognized domestically as well. This is why BTS is often referred to as the “reimported” idol group. After analyzing fan reception up until this point, we came to three reasons as to why this is so.

What are these reasons?

The first reason is because their music is based off of my love for hip-hop music. The West has a long history of popular music. Their audience chooses their songs based on the genre. However, the average K-pop song is different. They may have trendy beats but contain Korean-style melodies and performances, which makes it hard for these songs to become universally loved. BTS songs seem to reverberate well with Western listeners. Second, the members personally write their own songs. Western audiences take into account how much of the artist’s soul is bled into the music. Finally, their lyrics are not traditional. Whereas most K-pop songs deal with love or break-up, BTS’ music deals with ideas involving school and youth.

When BTS debuted in 2013, they were referred to as the “dirt-poor idols.”

It’s a fitting nickname. Not only is our company not a major label, but they were only our second group after (the now-disbanded) girl group GLAM. At the time of their debut, we also failed to do proper market analysis. Of course, since BTS were also being associated with me, a so-called “star producer,” many disagreed with this idea.

The band members produce their own songs, and Bang has left the members alone to practice ever since they were trainees. The members even adjust their own schedules. This sense of freedom given to the artist is reminiscent of the system in place at YG Entertainment. Not only that, the technique of repackaging a previously released album as a re-release is similar to that of SM Entertainment.

“If we are accused of copying YG or SM, then that means we are doing something right,” said Bang. “When I first started off, I looked at SM as a role model since I knew nothing. And like YG, I set a musical base of hip-hop and allowed freedom to the members. There may be some artists who may have difficulty making their own decisions, but the members of BTS enjoy their independence.”

The CEO is a producer with a stacked resume. After graduating from Seoul National University with a degree in aesthetics, he joined JYP Entertainment as one of the top producers, eventually setting up his own company in 2005. After producing one of singer Baek Ji-young’s biggest hit songs “Like Being Hit By a Bullet” in 2008, the producer was propelled to the spotlight. He attributed the success of K-pop to “visual universality” with their strict choreography and music videos being able to overcome language barriers. Bang said that the creation of the K-pop chart on iTunes was a symbolic event, with Korea being the only region after Latin music with an entire dedicated genre.

“I see Latin pop as the role model of K-pop,” said Bang. “There is a chance to expand in the western market by not trying to copy their style. Just like how Latin pop exploded in popularity, in order for K-pop to become recognized in the west, it must increase its volume.”