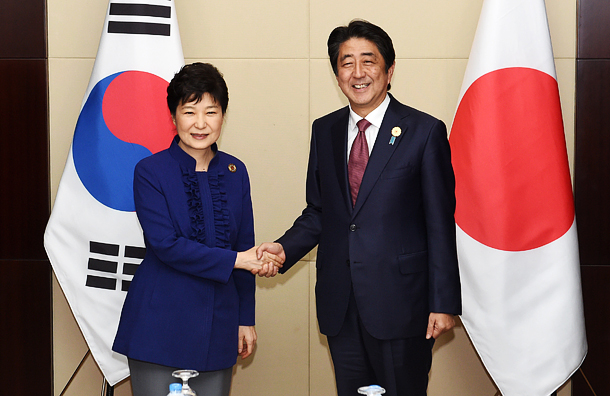 This year, one of the focuses of Japan’s Ministry of Foreign Affairs is maintaining its alliances. With the U.S. presidential election underway, Tokyo is determined to minimize its impact on the U.S.-Japan alliance. Tokyo is closely watching the last-minute rise of Republican candidate Donald Trump, who claimed Japan was benefiting from a free ride on security. Democratic standard-bearer Hillary Clinton’s victory will also fan neo-isolationism, the origin of Trump’s popularity.

Both candidates oppose the Trans-Pacific Partnership, which was initiated by the Obama and Abe administrations. The partnership is part of the United States’ pivot toward Asia and its strategy to check a Sinocentric trade order. The Abe government began the ratification process for the trade agreement last week, a move to pressure both U.S. candidates.

Japan is also managing Korea-Japan relations. One issue is the so-called comfort women agreement reached between Korea and Japan at the end of last year. As per the agreement, Korea is supposed to work on relocating a protest statue set up outside the Japanese Embassy. But progress is unlikely as public opinion in Korea is not favorable.

Moreover, Tokyo is concerned as Korea’s opposition parties may deny the agreement altogether. Japanese lawmakers who attended the Korea-Japan Parliamentarians Union meeting in Seoul last week were quite surprised at the hard-line stance of opposition lawmakers. As a preventative warning, Japanese Foreign Minister Fumio Kishida said, “It is important to faithfully fulfill the comfort women agreement.”

Another issue is the signing of an agreement between the two militaries to share protected information. The agreement would benefit both countries considering the advancement of North Korea’s nuclear weapons and missiles. Japanese reconnaissance and submarine intelligence would be useful for South Korea. There is no reason to slow things down. Japan seems to think, though, that politics may take precedence over security.

Holding a Korea-China-Japan summit meeting next month is also a concern, as Japan is the chair country. While the schedule is flexible, President Park Geun-hye’s first visit to Japan is a sensitive issue. If the political vacuum from the Choi Soon-sil continues, it will be realistically impossible to arrange a foreign visit. President Park Chung Hee never officially visited Japan, except for a 30-hour layover en route to the United States in November 1961. Park Geun-hye may repeat that precedent. Japan is watching the situation in Korea as much as it is the U.S. presidential election.

The key is whether Korea’s foreign policy system is working properly. Domestic affairs are inevitably affected, but diplomacy should still remain functional. The authorities should not hide behind public opinion or follow political tides.

Agreements between governments should be maintained regardless of the domestic situation, and moves that help national security should be made. National interest should be prioritized, not the interests of an administration or political faction. After all, in diplomacy, failures are publicized and successes are hushed.