BMW looks to the future with self-driving cars

BMW looks to the future with self-driving cars 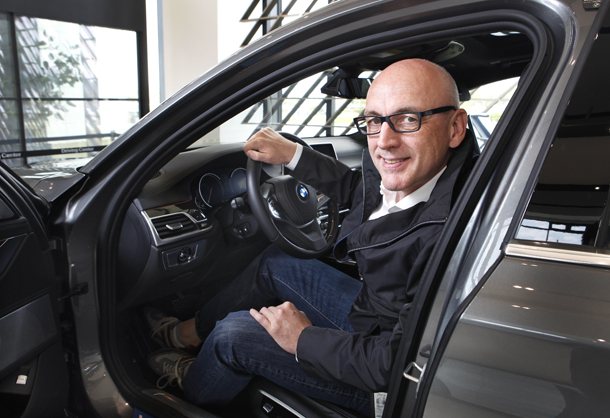 For the past century, German luxury automaker BMW has made “sheer driving pleasure” its brand focus. But will it still remain so when cars learn to drive themselves?

Pursuing fully autonomous self-driving cars is the latest trend in the global auto industry, and BMW is no exception. The company has been working on developing cars that can do everything from change lanes to park themselves.

Martin Steurenthaler, manager of product development at BMW Korea’s R&D center, said the new technology is about helping drivers “be the best driver,” not about taking away the fun of driving by replacing it with a computer.

“Although full autonomous driving technology is being developed, the function is only going to come in when necessary, when the driver wants to be productive while staying inside the vehicle,” Steurenthaler said during a recent interview with the Korea JoongAng Daily.

Steurenthaler explained that congested roads with bumper-to-bumper traffic are one case where autonomous driving technology can be most useful. “A situation like this would call for what we like to label as ‘me time’ where you want to do something productive such as make private or work-related phone calls or go over paperwork without having to keep your hands on the wheel and eyes fixed on the road.”

The most recent piece of autonomous driving technology developed by BMW is called overtaking assistance, where a car can detect vehicles and surrounding objects up ahead to safely change lanes and overtake a car in front. However, the technology has yet to be commercialized.

The latest to be commercialized by BMW is remote control parking, where the car tucks itself into a tight parking space while the driver is outside the vehicle. The technology is already available in the German market and is in the process of getting approval in Korea, pending issues related to radio frequencies.

“The technology will be especially useful in Korea, where parking space is always lacking and very small,” Steurenthaler said. “It will prevent a situation where you have to be extremely careful about bumping the car door into the next vehicle or the wall.”

BMW has been testing its self-driving cars on highways for more than two years now, and recently in June, it formed a partnership with American tech giant Intel and Israeli driver assistance technology developer Mobileye to work on technology that will be used in BMW’s 2021 iNext autonomous electric vehicle.

The partnership will allow the three players to exchange technical know-how as well as valuable test-driving data on an open platform to improve user-friendliness. “[Until now], the test drivers have always been experts - educated and experienced drivers,” Steurenthaler said. “It is time for you, me and everybody else to use that function.”

Steurenthaler emphasized that safety would ultimately decide who comes out on top in the highly competitive autonomous driving race. “Something we learned from the recent Tesla accident [where a driver was killed while operating a vehicle in autonomous driving mode] is that there are so many possible scenarios that can happen on the road, especially in an urban area like Seoul, which is why accumulating data and refining the related algorithm is highly important.”

On the Korean market specifically, Steurenthaler said one distinctive demand he has noticed over his past few years working in East Asia is infotainment systems that include both entertainment and detailed navigation data.

“Developing the innate navigation system in BMW vehicles for Korean consumers is part of my key agenda while being here because in the past, that was the most frequent complaint we heard from BMW Korea customers,” Steurenthaler said. “But that has been largely resolved now with the launch of the 7 series last year, where we installed a whole new database and changed it to 3-D.”

The importance of the Korean market to BMW is steadily growing. The Korean unit was launched here 21 years ago and is currently in the top tier of imported cars, running shoulder to shoulder with Mercedes-Benz.