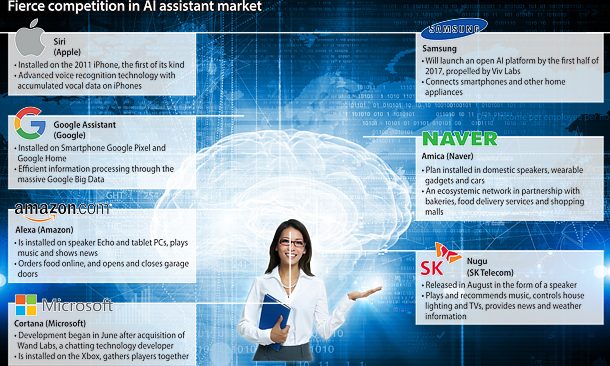 In a world where technological developments quickly infiltrate people’s lives, the next advance is expected in the market for AI (artificial intelligence) secretaris. Samsung recently announced its plans to jump into the market.

Dag Kittlaus, chief executive officer at Viv Labs, a start-up recently acquired by Samsung, speculated that AI will change the future, just as the advent of the Internet once changed the world. “Our children ask us, ‘How did you live without the Internet?’ Their children will ask them, ‘How did you live without AI?’” Viv Labs develops and provides an artificial intelligence platform.

Since Samsung Electronics announced it would set foot in the competition, other global information technology companies are also eager to make AI products. In fact, making and selling quality digital secretaries are thought to determine the successful outcome of an IT company in the future.

Artificial intelligence refers to programs that are equipped with the knowledge of their human makers, and AI secretaries are programs that carry out orders from human voices. Whereas we use our hands to look for information or request services via the Internet, in the near future, everything we do with our hands can be done just by talking to the devices. The name AI secretary came from how the programs will run errands asked of them, just as a secretary would. 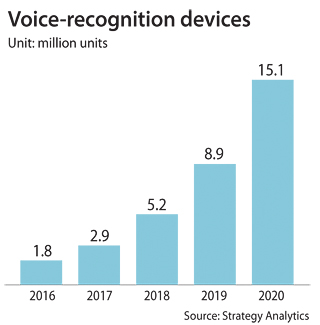 Almost all companies confident about their software programs have launched plans to develop their own AI secretaries. Although it is true that none of the companies are profiting from their current AI products, they recognize that, however unclear the exact future, the AI secretary market will balloon in the days to come, and are reluctant to let go of their shaky business models despite the fiscal hardships.

The market is already starting to grow rapidly. Apple launched the race with Siri, loaded on its iPhones in 2011. It was followed by many others such as Amazon’s Echo, the speakers that sought to bring about a real smart home service with its program Alexa, and Google, with its Google Assistant programs installed in speakers and smartphones. Korean companies have also entered the industry this year; SK Telecom released Nugu, Naver created Amica and Samsung is preparing to join the battle next year.

To a question asked to assess the marketability of AI secretaries, Choi Seung-jin of Pohang University of Science and Technology explained, “marketability isn’t enough to describe their potential,” and that “the age of Internet of Things (IoT) will come soon, in which every device, software and person will be connected to each other. The core medium of the connection will be speech recognition. The company that takes the hegemony in the market will be the one to make the connections with the people and the machines.”

As with other Internet and mobile service markets, experts predict that the winner will take everything in the new battleground. You need a vast amount of information to provide a precise and quick service, so the more users you get, the more data you get. So, the first one to get its hands on its share of the users will be the one to dominate the whole business. “That’s the reason why so many companies are looking to quickly set foot in the market, because it’s important to get a head start,” said Choi. “Since there’s no set leader at the moment, Korean companies also have a chance in taking the lead.”

Why are AI secretaries still unpopular, despite having been introduced five years ago? People in the business see obstacles in processing what are called natural languages, which are basically the languages people speak in their daily lives. There are two steps in analyzing a person’s speech. First, in the phonetic recognition stage, the program must dictate and determine what words the voices are saying. Second, the natural language analyzing process requires that the program, having confirmed what the utterances are, figure out what the speaker meant. The technology necessary for the first step has advanced quickly in the last five years, with less than 5 percent error, thanks much to deep learning, which enables a program to teach itself through the given data.

The problem lies with the second stage, where the machine must process the meaning of the speech. Current systems lack the contextual understanding, oblivious as to the specific meanings derived by different situations and tones, and fail to give the appropriate answer to the users’ requests.

“Apple and Samsung, being the giants they are in the smartphone business, have a strong point in processing the vocal data of their users, whilst Google has the upper hand in analyzing natural language, because it has such a vast range of information on its database and a popular translator,” said Shin Jin-woo, an electric-electronic engineering professor at Korea Advanced Institute of Science Technology.

Different companies will provide their service on different kinds of devices, according to their company plans. That could also mean that no product has been confirmed of its convenience yet.

Nevertheless, there exists a certain direction in which the market is heading. Most companies agree that rather than coming up with a solitary system, it’s better to collaborate with outer services to form a digital ecosystem. Hence Naver’s Amica, released last month, operates on partnerships built with other companies such as SPC, a bakery franchise, GS Shop, an online shopping mall, and Baedal Minjok, a mobile food delivery app. Samsung said it will offer its AI interface to all service providers when it launches next year.

“Home speakers can only go so far in the market, such as those made by Amazon and Google Home. And so companies with the smart device technology are the ones expected to expand the AI service,” said Lee Kyung-jeon, a business professor at Kyunghee University and also the director of the Big Data research lab. “Rather than personifying the technology by calling it ‘secretary’ and belittling the consumers’ expectations, it would be better to deliver the exact concept of the program to the consumers as a ‘AI secretary.’”