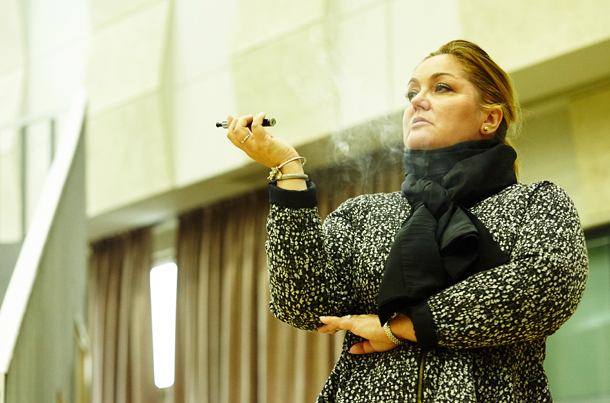 Korea National Opera is staging R.Wagner’s “Lohengrin” next week at the Seoul Arts Center, southern Seoul. Above is soprano Catherine Hunold, who is playing Ortrud, rehearsing for the performance. The opera goes on for four and a half hours including two intermissions. [KOREA NATIONAL OPERA]

A country is in political chaos. There are people drunk with power, making up lies and plotting conspiracies. The leader is too authoritative and asks for unquestioning obedience from the people. The people start to have doubts in the leader and challenge the powers that be.

Although this may sound like the politically tumultuous past few weeks in Korea, it’s actually the rough synopsis the upcoming opera “Lohengrin” by Richard Wagner (1871-83) that organizers say will “interest the masses who haven’t ever been as interested in politics than they are right now.” The opera was staged previously in Korea in 1976, but has never been performed since.

“Lohengrin” is based on an old and mystical German legend. The original story is set in 10th century Germany when the Kingdom of Brabant is in chaos. The old Duke requests Count Telramund to look after his son Gottfried and his daughter Elsa after his death. But Telramund, who is eager to extort the authority and power from the heir Gottfried, falsely accuses Elsa of killing her brother. Elsa prays for a perfect knight in her dreams to fight for her innocence. Her dreams come true when Lohengrin appears and he agrees to protect her under one condition: never to ask of his name. Then the story goes on.

The Korea National Opera (KNO) says it was eager to present this opera, set not in the 10th century, but in the current 21st century, an era which the audiences of today can relate to. That is why it invited Carlos Wagner’s modernized version of the opera. Wagner last came to Korea and staged “Salome” with the KNO in 2008 and received great reviews from critics. 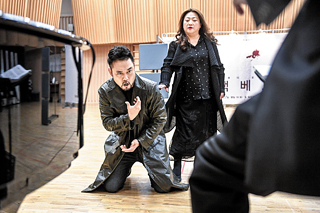 “After we decided to present ‘Lohengrin,’ I wanted to stage a more contemporary version of the work so that it’s easier for today’s audience to relate to,” said Kim Hak-min, the artistic director of the KNO. “Then I did some research and that’s when I first watched Carlos Wagner’s version and thought right away that such a contemporary concept is what KNO was aiming for.”

According to Wagner, the Venezuelan stage director who interpreted this work of the great composer with whom he shares a surname, “‘Lohengrin’ is a very difficult opera for a director of today to stage.”

That’s because, “we are looking at ‘Lohengrin’ backwards from the present day, whereas Wagner looked from before the Second World War - before everything had happened in Germany,” said the director. “Wagner had a completely different viewpoint to what we have, so as a director, you have to take a decision, whether to stage this opera from the viewpoint of Wagner or a viewpoint of today. So in other words, you have two choices as a director. You can either tell a fairy tale or tell a story that has relevance to real political situations.”

Wagner decided to go with the viewpoint of today.

“Wagner was very frustrated with politics in Germany because it was corrupt and inefficient,” he said. “He thought that if a charismatic, artistic person should take over, all problems would be solved. In a way, he’s presenting, with ‘Lohengrin,’ his utopia of somebody who’s designated by God coming and solving all the problems.”

For Wagner, such a concept seemed “too naive” and he decided to “take a very modern and present day look at this piece.”

“I’m a deep, deep democrat and a socialist, and I have big belief in democracy and that people should try to solve problems together. That’s what we have parliaments for and that’s why we get to elect leaders and don’t just get assigned,” said Wagner.

So the director decided to turn the stage into a national assembly and tell the story from there.

For the situation when Elsa is accused of killing her brother and she evokes the knight who should defend her case, she pleads in front of the parliament.

For the upcoming production, which will be staged three times on Nov. 16, 18 and 20 at the Seoul Arts Center, conductor Philippe Auguin of the Washington National Opera and costume and stage designer Conor Murphy, teamed up with director Wagner.

KNO’s “Lohengrin” will star soprano Sun Young-seo as Elsa von Brabant, Charles Kim as Lohengrin, bassist Mikhail Petrenko as Heinrich the Fowler and soprano Catherine Hunold as Ortrud. The opera, which will run four and a half hours including two intermissions, will be performed in German with Korean and English subtitles. Tickets range from 10,000 won ($8.70) to 150,000 won.

Meanwhile, the Seoul Metropolitan Opera is also staging Verdi’s “Macbeth” - a piece, according to the organizers, “that will help audiences to mirror the current politically chaotic situation of Korea,” from Nov. 24 to 27 at the Sejong Center for the Performing Arts in central Seoul.

The Seoul Metropolitan Opera is staging Verdi’s rendition of the Shakespearean tragedy for the first time since it premiered in 1997.

“We decided to bring back this piece, not only to honor the 400th anniversary of Shakespeare’s death, but also because we believed that this work helps us to reflect the lives of the contemporary people,” said Lee Geon-yong, the opera’s general director. “This work deals with greed and avarice and people who believe that greed is a virtue. I don’t think it’s much different to today, especially in Korea where we are going through political turmoil. I personally believe that Shakespeare wrote the play as if he’s warning the people.”

For the upcoming production, maestro Koo Ja-beom of the Gyeonggi Philharmonic Orchestra will hold up his baton.

“When I first received the request from the Seoul Metropolitan Opera to do ‘Macbeth,’ I wasn’t that interested because I don’t really like Verdi’s opera,” said Koo. “But the more I looked deeper into the story, I believed that it is worth doing because there’s a message to tell the audiences of today.”

The opera stays quite true to the original storyline, centering on the Scottish general Macbeth. The trio of witches tells him that he’s going to become the King of Scotland and Macbeth becomes filled with greed and ambition. He ends up murdering King Duncan to claim the throne for himself but he ends up destroying himself with his own greed.

“I see what we, the people of Korea, are seeing these days politically, reflected right on the stage in ‘Macbeth,’” added Koo, “especially towards the second act when Macbeth gets manipulated by the witches and does as they say.”

The music, like the storyline, is so powerful that a wire of the grand piano in the rehearsal room snapped during practice right before the press conference last week, hinting at how intensive and powerful the music is going to be.

The opera is play director Ko Seon-woong’s first time directing an opera. Ko says he handed over all musical decisions to maestro Koo, while he focuses on how the work will be presented on stage, putting more focus on the details of the story line. Ko’s version of the play “Macbeth” has been quite acclaimed among theater critics in Korea.

“I’m sure that director Ko has embedded his own style in this opera which will be quite fresh to opera goers in Korea,” Lee said.