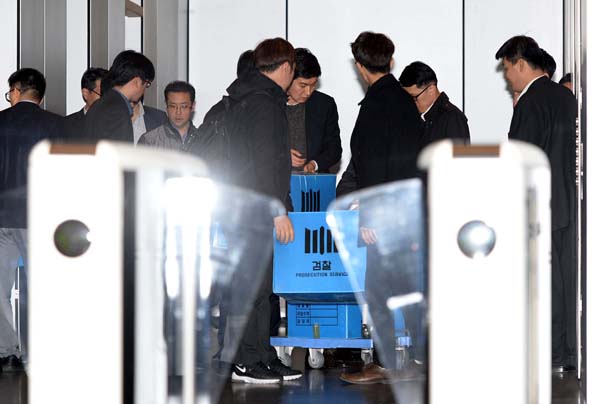 Investigators bring out boxes of documents and hard disks they confiscated from Samsung Electronics offices in Seocho-dong, southern Seoul, on Tuesday. [NEWSIS]

Prosecutors raided offices of Samsung Electronics early Tuesday in a widening investigation into Choi Soon-sil, the controversial friend of the president suspected of unlawful meddling in state affairs.

Samsung Electronics CEO Park is president of the Korean Equestrian Foundation (KEF), whose headquarters was also raided Tuesday morning. Prosecutors suspect some of 3.5 billion won sent by the company was spent on purchasing a horse and arranging a training session for Choi’s daughter Chung Yoo-ra, a dressage athlete.

Homes of officials related to the scandal were also raided and hard disks and documents confiscated. Prosecutors banned Samsung Electronics chief Park and another executive official at the company from leaving the country.

The future strategy division of Samsung Group, known as the company’s brain trust for business plans, was also raided.

Prosecutors said a total of nine places were raided Tuesday.

Prosecutors are looking into whether Samsung sent the money to Choi in the hope of receiving business favors from the Park administration. A prosecutor involved in the investigation told the JoongAng Ilbo Tuesday the probe unit obtained testimony that one of Choi’s associates, a former official at the KEF, put pressure on Samsung Electronics to give money to the KEF by exploiting his relationship with Choi.

A total of 53 conglomerates made contributions worth 77.4 billion won to two nonprofit foundations thought to have been created by the 60-year-old Choi, who is accused of meddling in state affairs, embezzlement of funds from the two foundations and the acquiring of classified presidential documents without clearance.

The foundations are now suspected to be slush funds to finance the president’s life after her term in office.

The Tuesday raid on Samsung Group headquarters, the first raid of the country’s largest business group in eight years, was seen as the beginning of a probe by prosecutors into the 53 companies that contributed to the two foundations.

The prosecution did not rule out the possibility of summoning chaebol group chiefs for questioning, which could lead to an unprecedented calling in of 53 business chiefs.

A vice president of Hyundai Motor Company surnamed Park was questioned by prosecutors Tuesday on why the carmaker contributed 12.8 billion won to the two foundations.

Much attention is being paid to an alleged behind-closed-doors meeting between President Park and seven heads of conglomerates in July 2015. It is reported that Park had one-on-one meetings with seven conglomerate chiefs on July 24 and 25, sparking speculation the president may have used the occasion to pressure businessmen to contribute to the foundations.

Lotte Group denied its chairman Shin Dong-bin attended such a meeting last year. Lotte committed 4.5 billion won to the two foundations and later made an additional contribution worth 7 billion won.

Lotte returned the 7 billion won just a day before prosecutors launched a far-reaching investigation into business malpractices, such as embezzlement and breach of trust in June.

Hyundai Motor Company declined to confirm whether its chairman Chung Mong-koo had encountered President Park in a one-on-one meeting in July last year, according to the JoongAng Ilbo.

One executive at the company was quoted as saying that even if Chong had been to the meeting, it was unlikely that the two would have talked about donations to the foundations in detail.

The prosecution said Tuesday it was planning to indict Choi on Nov. 19. Choi has been questioned since Oct. 31, a day after she returned to Korea after a two-month stay in Europe.

The Choi scandal has put the Park administration on the brink of collapse, with its approval rating nose-diving to 11.5 percent in the latest poll while embroiling major companies.