‘Lion King’ nears end of his career, but still has more to give

‘Lion King’ nears end of his career, but still has more to give 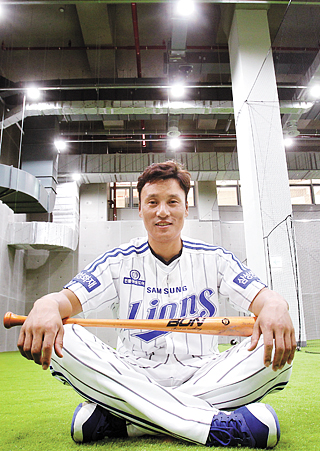 The Samsung Lions’s Lee Seung-yuop has had another successful year in 2016. Despite his brilliant performance on the plate, his team fell to see the worst season in its history and Lee vows to change that around before he retires after next season. [ILGAN SPORTS

The “Lion King,” Lee Seung-yuop of the Samsung Lions, is getting old in tooth and claw and readying to bid farewell, as 2017 will be the last year for the legendary slugger to step out of the dugout with a bat in hand. Marking the grand finale of one of the most acclaimed careers in the history of Korean professional baseball, Lee hopes to exert his last effort to make up for all the disappointment he and his team suffered in 2016 and to bring back the old glory to Daegu, the home of the Lions.

Lee, arguably the greatest hitter and most touted player in the history of Korea Baseball Organization (KBO), has a few landmark records under his belt; 600 career home runs and 2,000 career hits. The slugger is also an all-timer record holder of the KBO in two slugging categories, amassing 443 home runs domestically while collecting 1,411 runs batted in (RBI). Even at the age of 40 this year, he batted .303 while collecting 27 homers and 118 RBIs.

Although Lee had yet another solid outing this season, this did not reflect the team’s season performance as the Lions had the worst season in their 34 years of existence, finishing ninth in the league, a surprising outcome given that they have been pennant winners from 2011 to 2015 while grabbing four Korean Series championship titles during that period.

This led the Lions to push forward with some drastic changes, with Ryu Joong-il, former skipper of the Lions who led them during the heyday, replaced by Kim Han-soo, the team’s hitting coach.

Seeing the fall of his club, Lee said, “Even though my personal record was decent, the team didn’t do so well. We’ve been pennant winners for the past several years and it was definitely a letdown seeing other teams playing in the fall while we packed our bags.”

For Lee, who played for the Lions from 1995 to 2003, returning to the team in 2012 after spending a few years in Japan, the 2016 season was the first in 20 years in which he did not swing his bat in the postseason while donning the Lions jersey.

For a few years now, Lee has been saying he will retire after 2017. But the numbers he put up this year shows he’s still as capable as they come in the KBO. Still, the slugger says he feels his age creeping up on him.

“Frankly speaking, I feel less power when I swing my bat,” he said. “I have to admit this about myself. If I recorded these numbers back in the days, many would say I had a below-par season. But considering my age, I guess I spent the season well.”

Lee also played in more games than any other players in the team, going to the plate in 142 different games throughout the season, also the most number of games he’s showed up for in a single season throughout his career. “I was a designated hitter, so physically, I was less burdened compared to others,” Lee explained. “I had a few injury scares though, like when I hurt my lower back while sliding early in the season. It took me two months to recover fully from the injury. I fell into a slump because of the injury but I started to hit better towards the latter half.”

When asked about what 2016, his 22nd year as a professional baseball player, meant to him, Lee answered, “It was a difficult year. We started the season with a fighting spirit, with a new stadium and everything, but things started to crumble quickly. When you are having a good season, it goes by really fast. But I think this year felt longer than it actually was because we did so poorly.”

And with one more season penciled in, Lee also set his personal goal for the next year, playing on first base on opening day.

“Right now, we all need to take a break but I will have to start training soon, with weight training to begin with,” Lee said. “I hope I am in my peak condition by the time spring camp comes around. I already have a goal set for next year, which is to play on first base and help the team out in fielding.

“I guess I will have to compete against Koo Ja-wook [the Lions starting first baseman in 2016]. I have got to spend the off-season well to pull that off, keep my weight down, work on my conditioning and agility.”

Some of the Lions fans, however, hope to see Lee stick around for few more years. Lee is grateful for such sentiments and said, “There is nothing else I can do but give my utmost next year. I love baseball. I enjoy the sport. I am going to leave everything I have on the field.”